Sad : Man comes down from UBER and dives straight into the lagoon on Third Mainland Bridge(video) 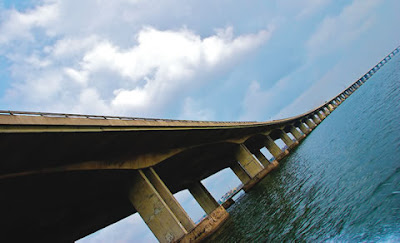 A tragic incident occurred today February 15, as a 22-year-old man allegedly identified as Daibo Toju Davies plunged into the lagoon from the Third Mainland bridge in Lagos state.

Davies said to be a resident of 17 Sosanya street in Soluyi area of Gbagada, engaged the services of an Uber taxi from a hospital before the sad incident.

It was gathered that he stopped the Uber halfway through the journey and pretended that he was having a running stomach before jumping into the lagoon.

“He should be in his mid-twenties. He ordered a car-hailing service from Gbagada to the Island. He deceived the UBER driver that he had a running stomach after which he jumped into the lagoon.“As I speak with you, the marine unit of the Lagos central zone has been searching for the victim since 11:30am, but we have not found the body.”

The means of identification found in the vehicles were two luggage containing his personal effects and a sworn affidavit with Lagos High Court.

0 comments on “Sad : Man comes down from UBER and dives straight into the lagoon on Third Mainland Bridge(video)”