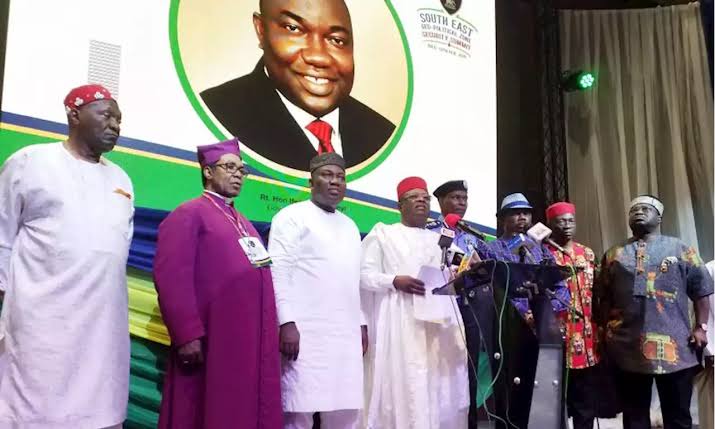 Founder of Igbo Youth Movement (IYM) and and Secretary-General, Eastern Consultative Assembly (ECA), Evangelist Elliot Uko has suggested that the Inspector General of Police (IGP) Adamu Mohammed pointedly gave the governors of the Southeast a direct order from President Muhammadu Buhari for them to suspend the regional security outfit they planned to create.

Uko who made the suggestion in a statement sent this correspondent, said it was embarrassing and that henceforth, it would be difficult for the youths of the zone to treat the governors with any respect.

The governors had after meeting with the IGP in Enugu on Wednesday, suspended their proposed regional security outfit in favour of the federal government’s community policing initiative.

But it’s a move that came as a disappointment to many in the zone and continues to be widely criticised.

“If it’s true that the F.G. pointedly told leaders of my zone to perish the idea of a zonal security outfit, whilst our Yoruba brothers, will officially formalize theirs (AMOTEKUN), next tomorrow, Friday, via parliamentary legislation, then, this sad development, will lead to more disrespect to our political leaders, especially from our young folks. Sad,” Uko said.

“Nobody in the entire nation understands the meaning of NIGERIA POLICE FORCE COMMUNITY POLICING. If you do, kindly help us elucidate.

“I say this because, many may not know how much pressure, I have personally borne, from our elders who have consistently pleaded with me, to tell our angry youth, whom they believe I influence, to please, please, please respect our political leaders.

“I pledged before our elders, some time ago, at a meeting hosted by Dr. Alex Ekwueme and chaired by Prof Ben Nwabueze, that, I’ll do all I can to make, even the most radical groups in Igbo land, see the need to respect our political leaders. But believe me, it hasn’t been easy.

“Now, tell me how easy these blokes are making my job turn out. Couldn’t they have kept quiet until they tie up all the knots? Why go public before getting the nod of the owners of Nigeria? Why pretend they are their own men, when clearly, they are not, as shown by the humiliating volte- face? Why won’t our young folks feel bad about this?

“On the day, Prof Ben Nwabueze, my humble self and Mazi Nnamdi Kanu met with the South East Governors, two and half years ago, I pleaded that they always comport themselves in a manner they would always earn the respect of the public,especially, the angry younger generation.

“Though, they are my friends, I sincerely doubt, if they did well today.

“They could have kept their peace, until they get the go-ahead.

“Now, when the salvos start raining in from all sides, they will resort to the famous last lines: This boys do not respect their Governors, they insult everyone.

“But truth is: Their misstep today, sends a very clear message, to wit;Yoruba Governors are not only better organized, they are also their own men.

“No wonder, some smart fellows who got wind (through telephone conversation, from Government House) that the Police IG gave unpalatable order, to suspend the regional security outfit, dutifully disappeared from the hall, pretending they were offended by the delay in kicking off the meeting. They simply didn’t want to be part of the humiliating order from the Oga at the top and his emissary.

“I don’t like the feeling running through my head. Just when you thought, they have begun to get things right.

“At what point did communication break down occur between our Governors and Aso villa? Why would ours be cancelled days after the announcement, killing our joy instantly and cutting off our people’s jubilation abruptly?