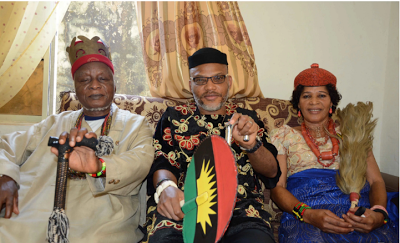 The leader of the Indigenous People of Biafra (IPOB), Nnamdi Kanu was unavoidably absent at Friday’s burial ceremony of his parents; Eze Israel Okwu Kanu and Ugoeze Sally Kanu.

Recall that there were rumours about the possibility of Kanu attending the burial of his parents as the first son in accordance with the customs and traditions of the community, but the fear of being arrested by the security operatives after being declared wanted by the government might have prevented him from attending the ceremony.

Some IPOB members said they would have been happier if their leader had attended the ceremony. They were, however, happy that they made it to Isiama Afaraukwu community to pay their last respect to the parents of their leader, who was absent at the event.

Kanu’s brothers; Prince Emmanuel and Kanuta stood in for him at the ceremony. The event attracted IPOB members and IPOB sympathizers from different parts of the country and the world.

Unlike the tension associated with the ceremony, there was no presence of military personnel around the Isiama Afaraukwu community, though there was a deployment of Police personnel in different entrance and exit routes of the community in an apparent move to forestall any breakdown of law and order.

According to our source, no shop was open for business around the Afaraukwu community. Some of the visitors, who came for the burial had to trek a distance before they could find what to eat.

School owners reportedly instructed their members of staff and students to stay at home as they couldn’t predict what could become of the event, following the recent utterances from IPOB and security agencies before the burial.

Former Governor of Anambra State, Peter Obi and the Senate Minority Leader, Senator Enyinnaya Abaribe had arrived St. Andrews Anglican Church Afaraukwu, where the commendation service for the late monarch and wife will be holding.

The remains of Kanu’s parents had arrived Umuahia North Local Government Area headquarters where they were received by the council officials to be taken to church.

The clerics were already seated while parishioners and guests arrived the church in trickles. Generally, the situation in and around the community was calm, though some IPOB members were spotted at some spots without their usual insignia.

Comrade Uchenna Madu of Movement for the Actualiation of Biafra (MASSOB) in an interview said he came to mourn with Kanu’s family.

Madu, who described the late monarch and wife as peaceful and loving people, said their death would mark the end of the killing of any IPOB or pro-Biafra group members.

Policemen were seeing around the entry points of the community, which the state Commissioner of Police, Ene Okon, said was to forestall any attempt to disrupt the event.

Meanwhile, the 14 Brigade Headquarters of the Nigerian Army, Ohafia, Abia State, yesterday denied the news that its officers arrested 40 IPOB members at Ubakala junction in Umuahia South Local Government Area of the state. The arrested IPOB members were said to be coming for the burial of parents to their leader, Nnamdi Kanu.

The Brigade Commander, Brigadier-General Solomon Kumapayi and the brigade spokesman, Iliya Dauda, couldn’t be reached for comments at the time of filing the report, but a source, who preferred anonymity, denied such allegation.

The source said it was the police that made some arrest.

Okon, however, said the police only arrested four persons with guns in Umuahia around the busy Okpara Square through the efforts of the eagle eyes of its officers on duty in the area.

The Police Chief also said there was nothing to identify the suspects as IPOB members, unless IPOB was claiming that the arrested people were their members.