The US Army has warned Americans about a “fraudulent text message” making the rounds and falsely telling Americans they have been drafted into military service for an Iranian war.

The content of the fake texts, according to CNN told the recipients to report to the nearest Army recruiting branch “for immediate departure to Iran.”

The message read: “We tried contacting you through your email several times and have had no response.

“You have been marked eligible for the military draft and ordered to report to the nearest Army branch for immediate departure to Iran.”

But, the United States Army urged Americans to ignore receiving multiple messages, describing it as a “fraud alert”

ALSO READ:   Confusion as Kenyan pastor stabs wife to death, stabs himself and slit his throat inside church

“This is nothing that we are initiating, they are completely fake,” said Lisa M. Ferguson, a spokeswoman for the United States Army Recruiting Command.

The draft into the military has not been in effect since 1973 when it was abolished amid opposition to fighting in Vietnam.

The US military has since been an all-volunteer force.

The message is coming amid mounting military tensions between Washington and Tehran.

Also, Canadian Prime Minister Justin Trudeau and the US had made a similar claim, revealing that it was actually Iran’s missile that shot down the Ukrainian airliner with 176 passengers on board.

But they all agreed that the action must have taken unintentionally. 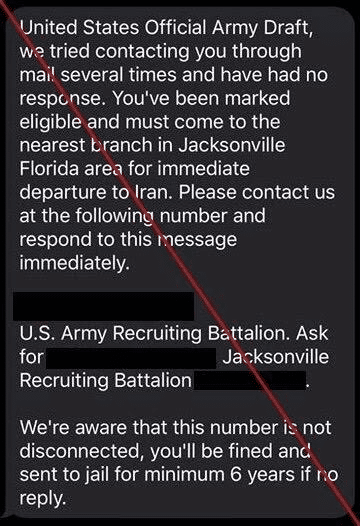 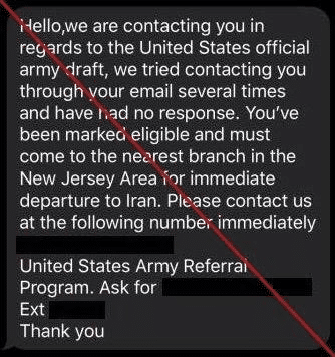 0 comments on “IranvsUS:US speaks on drafting message,says it’s a scam”