2023:IPOB Denies Attack On INEC , Says Politicians Are Out to Discredit ESN

The Indigenous People of Biafra, IPOB, on Friday, said its members are not the gunmen who attacked and killed an ad-hoc staff of the Independent National Electoral Commission, INEC, in Imo State. 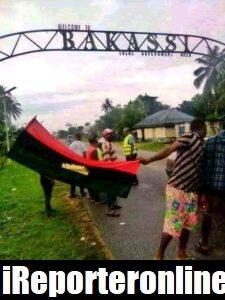 IPOB said enemies of Biafra are responsible for the attack that killed an INEC official.

One INEC staff was killed while others were declared missing.

However, IPOB warned those behind the act to stop because they would not be allowed to continue terrorizing the people of the Southeast.

A statement by the group’s spokesman, Emma Powerful, warned that those responsible for such attacks would be dealt with.

According to Powerful: “We the global movement and family of the Indigenous People of Biafra (IPOB) under the command and leadership of our great leader Mazi Nnamdi KANU, strongly condemn the attack on INEC staff at Ihitte Uboma LGA of Imo State. We are also warning these traitors and enemies of Biafra behind these barbaric attacks to stop or be ready to reap the reward of their atrocities. IPOB cannot afford to allow them to continue to terrorise our people or demonise our peaceful organisation as some uninformed people appoint accusing fingers at us.

“IPOB is not happy with these criminal activities going on in our region because we don’t want this to continue and we are going to expose those behind this evil in the region.

“Anybody involved in this act will regret it. We totally disassociate from this act of criminality. IPOB volunteers and ESN have no hand in this criminal act that criminals randomly carry out against our people.

“We have made it clear to the public severally that IPOB members are not unknown gunmen and we cannot be because we have an objective which is to restore Biafra as a free, Independent and Sovereign Nation.

“Anybody who is involved in this evil act on INEC officers at Ihitte Uboma LGA will pay dearly. The masterminds are being sponsored by unfortunate politicians thinking they can jeopardise our decision to make Biafra freedom a reality.

“We want to make it publicly known that IPOB and its security units did not attack INEC officers in Imo State. We are aware that Nigeria Government and their collaborators are sponsoring these criminal groups to attack our people in the name of IPOB to instigate a crisis so people can disassociate themselves from IPOB activities and the entire world will see IPOB as a terror group but they will fail and will not raise their ugly heads again. We promise them so.

“IPOB will not relent in discovering those behind these devilish activities and expose them.”