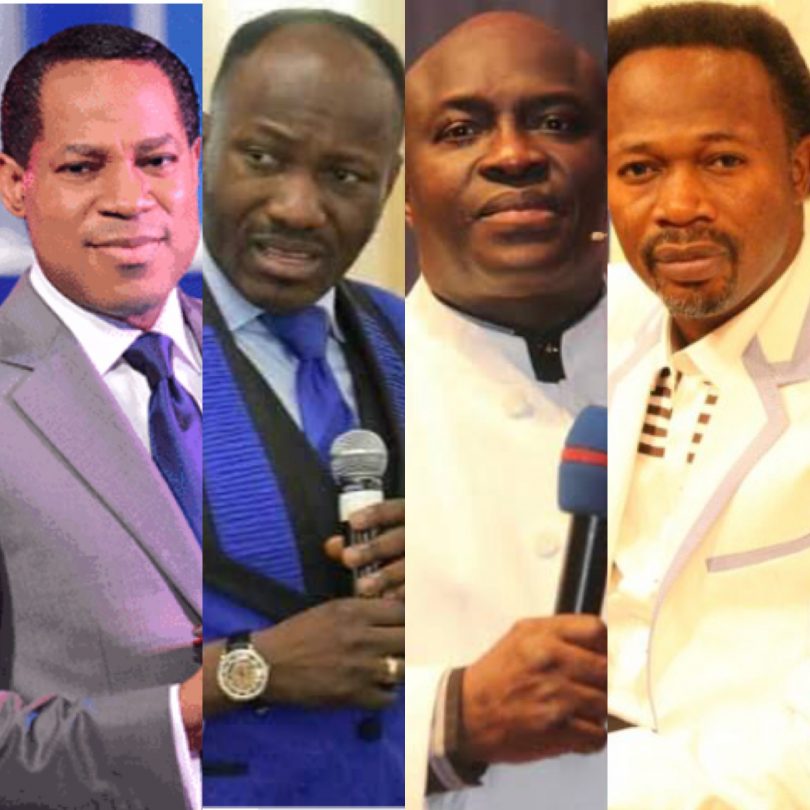 Pastors, especially in Nigeria, are mythical figures placed on pedestals, not even possible in the mortal realm.

Nonetheless, people view them with that lens; spiritual leaders who operate on the extreme moral consciousness and seen as too virtuous for any misdemeanour.

But as history has shown, they are mortal, humans, who are capable of falling from grace like every other.

Today, we are looking at Nigerian pastors who have had their transgressions in public glare on our Pulse List.

These pastors on the list have at a time been caught up in a cheating scandal.

Being caught up in a cheating scandal does not mean they cheated. That’s none of our business.

This is a list of pastors who have had their personal business exposed to the world.

In 2014 news broke that Senior Pastor of Believers Love World Incorporated, also known as Christ Embassy, and his wife, Anita were divorcing.

Many at that time did not believe, but it was eventually true.

Pastor Anita filed for divorce at a London court on ‘unreasonable behaviour’ grounds which, according to reports at that time, included adultery.

According to Vanguard, Pastor Chris denied allegations of adultery and believed that his wife was being influenced by bad friends who were intent on destroying his home.

No pastor in modern Nigerian history has faced scrutiny like Pastor Biodun Fatoyinbo, the Lead Pastor of the Commonwealth Of Zion Assembly (COZA) in Abuja.

Fatoyibo’s cheating scandal started in 2013 when a blogger, Efe Walter accused him of having an affair with her.

Since then, a deluge of accusations has followed, including that of rape.

In 2018, music star, Busola who is the wife of singer Timi Dakolo, accused the flamboyant pastor of molesting her when she was a teenager.

Apostle Johnson Suleman is seen as one of the most fierce and spiritually equipped pastors in Nigeria. No wonder his infidelity scandal remains a shock to the flock.

In 2017, a Canadian-based stripper, Stephanie Otobo claimed to be the secret lover of the General Overseer of the Omega Fire Ministry.

She gave an alleged detailed account of their relationship, including the pastor’s gifts to her. She also accused the pastor of also having an affair with Nollywood actress Daniella Okeke. The pastor denied all these allegations.

In 2020, a man identified as Pastor Mike Davids accused the Auchi-based pastor of having an affair with his wife, Faith Edeko. He alleged that his wife confessed to the adulterous relationship with Suleman.

Bishop Chris Kwakpovwe rose to prominence in Nigeria and overseas for his writing brilliance and creating one of the most read religious books ‘Daily Manna.’ However, in 2017, Rita Ibeni, a member of Our Daily Manna/Manna Prayer Mountain Ministry, alleged that the pastor made sexual advances.

Later, a telephone conversation recording of Ibeni and a man alleged to be Kwakpovwe emerged.

In the recording, the man confessed his love for Ibeni and expressed interest in having sexual relations.

The church later released a statement insisting that the pastor was not the person in the phone conversation.

The senior pastor of Champions Royal Assembly, Joshua Iginla startled his congregation in 2019 when he confessed to having an affair outside his marriage.

Iginla talked about how he and his wife were headed for divorce and have spent the past few years as a united front while fighting adultery-related battles.

He also told the congregation that his wife cheated on him and failed to turn a new leaf, a burden he has borne for the last seven years.

Iginla also admitted while still married, he and his wife had babies out of wedlock.

Bishop Francis Wale Oke of the Sword of the Spirit Ministries, also known as Christ Life Church left many Christians in shock after he came out clean about his adulterous lifestyle.

The man of God confessed before his church congregation that he was having an affair with his secretary.

According to him, that relationship had been on for years. Oke who was already rated as one of the top pastors in the country, saw his ministry and church hit by that open confession.

One of the most interesting stories on this list is that of Pastor Chris Omatshola of the Zionwealth Ministry, Lekki. in 2019, the sex tapes of the young pastor were released on social media with a lady identified as Princess Tamara Okpewho.

Omashola in his defense said he knew about the tapes; “Princess and I had more than 10 sex tapes of ourselves on our phones as she enjoyed filming sex. Honestly, the sex tapes were recorded sometimes in October 2017,” he told Punch.

While Okpewho accused Omatsola of releasing the video to force her into marriage with him, the cleric told Punch that the video was leaked to blackmail him.

Pastor Timothy Ngwu of Vineyard Ministry of the Holy Trinity was also involved in a very messy scandal. The pastor was accused of having affairs with several female members of his congregation.

In 2015, Ngwu was arrested over accusations that he impregnated 20 members of his congregation.

According to reports, it was his estranged wife Veronica who reported the pastor to the police before his arrest.

JUST IN: Another Popular Pastor Is Dead [PHOTO]

Why God Hasn’t Solved The Problems In Nigeria- Daddy Freeze