A group under the aegis of Alliance for the Advancement of Auchi Polytechnic has called for due process to be followed in the appointment of a substantive rector for the polytechnic.

The convener of the group, Alhaji Oshiobugie Danjuma who made the call in a statement made available to newsmen in Benin on Sunday, said the call became necessary to avoid taking the polytechnic back to the “dark days.” 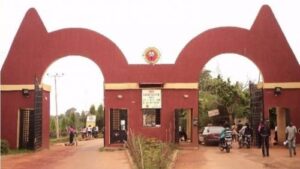 Danjuma further explained that the appointment of a rector with the right requisite would place the first generation polytechnic in a pole position for its planned upgrade to a University.

He said the issue that had caused the dichotomy between the Polytechnic and University must also be considered.

“The authority must try to avoid the issues that have brought about the acrimony between the polytechnic and University graduates in the appointment of a substantive rector in Auchi polytechnic,” he stated.

He particularly noted that subverting the most qualified person for the rectorship position would not augur well for the nation’s foremost polytechnic.

According to him, “We are aware that interview for the appointment of a substantive Rector for the Polytechnic has been conducted and we are also aware that there are Master degrees and Phd holders that were interviewed for the position.

“Our position is that it will be out of place to appoint a Master degree holder as substantive rector when you have qualified Phd holders. Doing that will not alllow the polytechnics to compete favourably with the Universities.

“Again, the case of Auchi polytechnic should not be any different in the country where all rectors are all Phd holders.

“We however need to reiterate here that we are for nobody or anybody, we are only out for the right thing to be done for the betterment of the institution that have been recognised and acknowledged as a first generation polytechnic in the country.

“Moreover, the plan upgrading of the polytechnic, which bill have received the nod of the National Assembly (NASS), must not be jeopardised just to satisfy some few persons.”

APC National Chairmanship Revealed: Why All Eyes Are On Saliu Mustapha