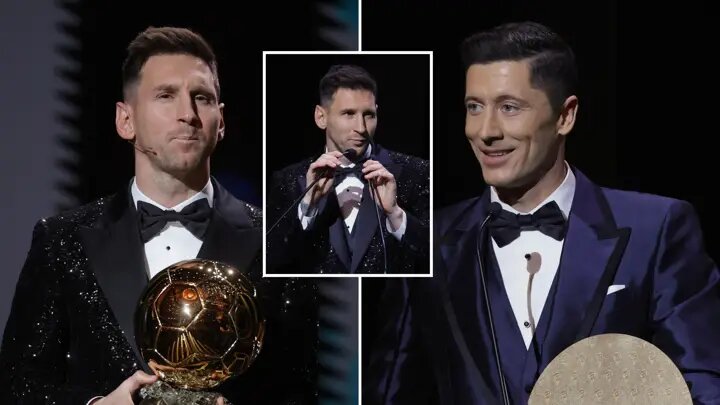 Lionel Messi may have pipped Robert Lewandowski to this year’s Ballon d’Or, but Lewandowski may still win the award after all.

When Messi collected the award on Monday night – for a record-breaking seventh time – he acknowledged Bayern Munich and Poland striker Robert Lewandowski.

The 2020 edition of the award was cancelled due to the pandemic, but Messi pleaded with France Football to award Lewandowski the title retrospectively.

“Robert, you deserve your Ballon d’Or,” he began.

“Last year, everyone was in agreement to say that you were the big winner of this award. Hopefully, France Football will give you the 2020 Ballon d’Or. We all believe you deserved it and I hope you can have it at home.”

Lewandowski scored 55 goals in 2020, more than any other player, but the award was cancelled due to Covid-19.

“What Messi said was nice and clever,” he admitted to Watson via Bulinews.

“I think we do not have to make very quick decisions. We can think about it and at the same time we should respect the history of the Ballon d’Or, which is based on voting.

Lewandowski admitted he was enjoying the best season of his career to date shortly after the decision was made to cancel last year’s Ballon d’Or.

However, he has continued in fine fettle this term, scoring three goals at Euro 2020 for Poland and a further eight during qualification for the 2022 World Cup in Qatar.

For Bayern, he has conjured up an unbelievable 25 goals and two assists in just 20 games for the Bavarian giants so far this season.

This is why he was a leading contender to take home the recent 2021 Ballon d’Or as well.

Whether Lewandowski does get the 2020 edition retrospectively – or indeed whether he ever wins the Ballon d’Or – remains to be seen. One thing is for sure: he can hardly do much more to deserve one…