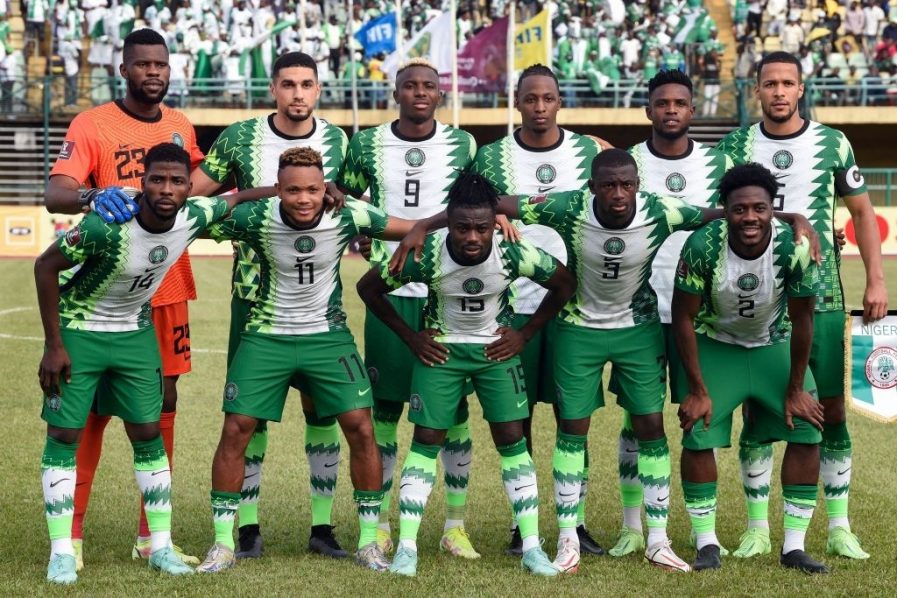 Nigeria’s Super Eagles will have to get the better of the Black Stars of Ghana if they hope to qualify for a fourth straight FIFA World Cup after both sides were paired up in the play-off draw for the 2022 Qatar World Cup on Saturday in Douala, Cameroon.

The games will take place between March 24 and 29, with the first leg taking place in Ghana while the return leg will come up in Nigeria.

The Super Eagles were one of 10 African nations who went into Saturday’s draw ceremony which had African legends El Hadji Diouf of Senegal and Emmanuel Adebayor, the former Togo international of Nigerian descent, as draw assistants.

They will now be hoping to be one of the five sides who can progress to the 2022 Qatar World Cup taking place at the end of the year in the Middle-East nation.

The three-time African champions will also be looking to equal an African record four consecutive World Cup appearances in what would be their seventh appearance at football’s biggest stage.

The Super Eagles, who have been to every FIFA World Cup except one since making their debut appearance at the 1994 tournament in the United States, qualified for the third round play-offs by virtue of their top-place finish in a second round group that had Cape Verde, Liberia, and Central African Republic.

Ghana, meanwhile, advanced to the third round play-offs after finishing ahead of South Africa, Ethiopia, and Zimbabwe in Group G.

The Black Stars, after missing out of the last World Cup in Russia, will be hoping to make their fourth appearance at football’s biggest tournament in Qatar.

This is irrespective of the fact that their outing at the AFCON in Cameroon has been disastrous.

There were also some question marks about their victory over South Africa during the second round of the World Cup qualifiers.

The Super Eagles are looking like a completely different prospect at the AFCON following the departure of Gernot Rohr.

Under former Nigeria international, Augustine Eguavoen, the Super Eagles, have romped through the group stage with a 100 per cent record and are looking like genuine AFCON contenders.

They are a far cry from the team that had difficulties putting lesser teams away, with Cape Verde and the Central African Republic being prominent recent examples.