Abeg where is Adams Oshiomhole? 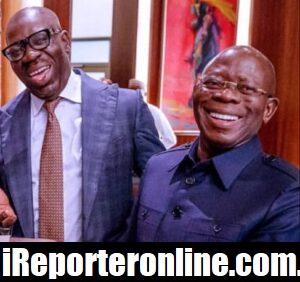 Nevertheless, the same PDP don still come out say the news na terere that is fake news. But the matter is that Obaseki has taken full charge of the PDP and has started dismantling the original owners of the PDP.

Are you aware that Chief Dan Orbih was the last chairman standing in Edo State PDP that built the party together again after Oshiomhole taught them a bitter lesson?

Chief Dan Orbih fought gallantly against Adams Oshiomhole, as a matter of fact, Chief Dan Orbih was a no-nonsense chairman that was always barking at Adams and the APC, he was a thorn in their flesh.

Then let me tell you guys also Ogbeide Ihama’s gist. OOI as fondly referred to is one of the foremost PDP lawmaker that has never left the party for any other alliance how much more party.

Weda Obaseki finally defeats them or not is not the subject of this gist, after all na entertainment for us.

The koko is how is Adams Oshiomhole feeling now? Comrade that happens to hold the enviable record as the most flawless Governor after achieving the great feat of 18/18 for his reelection. To date we still dey find who get that record for all the governors since 1960 to date.

Adams that changed the face of Benin City from an ancient City to a classic model was humiliated and disgraced with much propaganda on Godfatherism. Now Edo State is in the firm grip of Obaseki with his Deputy Philip Shaibu feeling oppressed as well.

Like this so APC dey dance azonto ontop PDP crisis that is currently making the rounds.  Ours is to sit back and report. Anything Eye see, Ear hear , IReporter must talk.