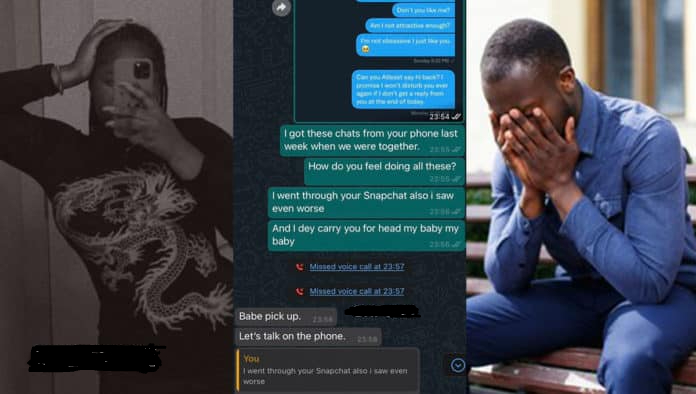 A young man has become the latest gem to severely suffer heartbreak after unearthing some scandalous social media activities of his girlfriend on her phone.

In the early hours of Thursday, August 19, 2021, the highly disappointed man identified as Mide The Badguy on Twitter took to the microblogging platform to narrate how he uncovered his girlfriend’s infidelity.

According to Mide, he decided to snoop into his girlfriend Ginika‘s Snapchat, WhatsApp, Instagram and Twitter messages when she was taking her bath while they spent time together about a week ago.

It was at this point that he received the shock of his life after he found out that his girlfriend, who he spent 8 months to win her heart by buying her an iPhone 12 Pro Max and different gifts, has been sending nudes pictures of herself to other men on the internet.

For purposes of evidence, he took screenshots of his girlfriend’s texts to her supposed crush on Twitter who she sent her phone number and raw photos of her boobs and bum to get his attention.

He wrote: “Women will disgrace you!. I went through my girl’s phone last week while she was having her bath, Snapchat, WhatsApp, Instagram and Twitter.

“Things I saw shocked me. Spent 8months doing talking stage with this girl, bought an iPhone 12 Pro Max and different gifts before she gree.“

The man said he “decided to confront her last night about her shenanigans and she didn’t deny which led to our break up.”

Swipe to read the full chat below as shared by ghpage.

After discontinuing the relationship, he further went on to demand his iPhone 12 Pro Max which is barely three weeks old.

He served notice to his girlfriend that he will be at her how the next day for the expensive “luxury” device.

It was not long after the girlfriend put the phone up for sale on social media.

SEE THE PHOTO BELOW.

As early as 7 am this morning, Mide was at Ginika’s house to retrieve his iPhone but he met her absence when he arrived.

He subsequently took to Twitter to call out his girlfriend and literally begged her not to let him “lose both ways” as he “can still sell it and get my money back”.

He wrote: “@Ginika_a I’m at your house this morning, got here as early as 7am to collect my phone, I’m still here, they said you’re not around, please Ginika I take God beg you, that phone is barely 3weeks old, I can still sell it and get my money back make I no lose both ways.”