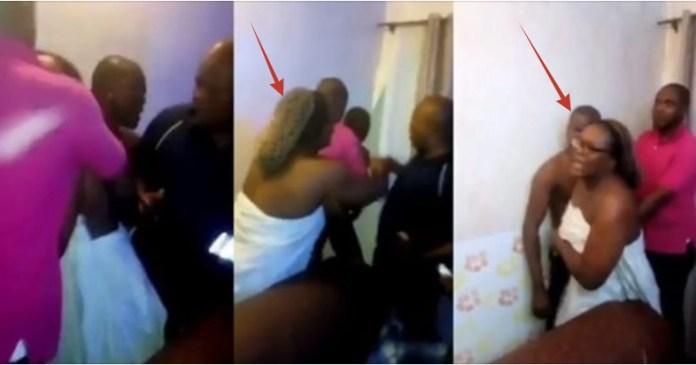 There was bl00dy vi0lence at about 10 pm yesterday when a policeman stationed with Kwabenya District Police Headquarters, Sergeant Oheneba Adu caught another man raw in bed ch0pping his wife who is also a policewoman.

It was revealed that Sgt. Oheneba received information that someone was having the interc0urse with his wife, Sgt. Mrs Adu who is also a policewoman at a suburb of Adenta Animal Research Area.

He followed up to the location and found his wife unclad in bed with another man who was sm0king Indian hemp while romping her up and down.

A confrontation ensued in which the man assaulted and inflicted wounds on police Sgt. Oheneba Adu whose wife couldn’t intervene as her fellow police officer and husband suffered severe beatings in the scuffle from her boyfriend.

The boyfriend pulled a knife and threatened to kill Sgt. Adu who lost his two mobile phones in the melee. The matter has since been reported to the station for an investigation to commence.

Lovely!! Be The Judge; Are These Water Melons Or B00bs On Her Chest? (Video)

Hilarious!! Lady Heaps Praise On A Guy Who Took Her To Cloud 9 And Gave Her Heavenly [email protected]’(Video)