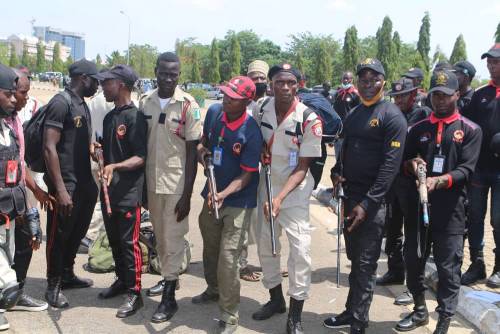 Members of the Vigilante Group of Nigeria (VGN) from various states in the country on Tuesday stormed the National Assembly Complex in Abuja to seek legislative backing that will enhance their operations in the country.

The group who mobilised its members in large number to participate in a one-day Public Hearing on the Bills for an Act to establish the Nigeria Hunters Council of Nigeria, a Bill to establish Nigeria Peace Corps and others by the Senate Committee on Interior.

The members of the group who brandished various types of local guns called for the passage of the bill to enable them complement the efforts of other security agencies in protecting lives and property as well as preventing crimes.

Armed policemen attached to the gate of the main gate denied the group access into the complex but asked the leadership of the group to attend the public hearing.

The situation led to gridlock at the federal secretariat as motorists took other routes to avoid being trapped.

Some of the members were seen with charms and fetish items attached to their clothes and waving horsetails in the area.

Other bills to be considered at the hearing include a bill for an Act to establish Unity Corps as well as Civil Defence Academy.