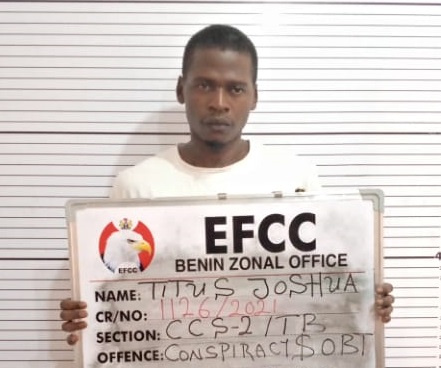 An alleged fraudster, Titus Joshua who claimed to be Chief Security Officer to President Muhammadu Buhari was on Thursday arraigned by the Benin Zonal Command of the Economic and Financial Crimes Commission, before Justice S.M.Shuaibu of the Federal High Court sitting in Benin City.

A statement by the EFCC spokesperson, Wilson Uwujaren, said the suspect was arraigned on a five-count charge bordering on conspiracy and obtaining by false pretence.

The statement added that the suspect is alleged to have defrauded his victims of over N200 million under the pretence of helping them secure top management positions at the Niger Delta Development Commission, NDDC.

One of the counts read: “that you, Titus Joshua sometime between 10th August, 2018 and 30th September, 2021 at Orhionmwon Local Government, Benin City within the jurisdiction of this Honourable Court did fraudulently obtain the total sum of(N12,216,000) Twelve Million Two Hundred and Sixteen Thousand Naira only from one Engineer James Igbinosun which you claimed was money to facilitate the application of the said Engineer James Igbinosun into the position of Managing Director of Niger Delta Development Commission, NDDC which you instructed the said Engineer James Igbinosun to pay into various accounts, the pretence you knew is false and thereby committed an offence contrary to Section 1(1)(b) of the Advance Fee Fraud and Other Fraud Related Offences Act 2006 and punishable under Section 1(3) of the same Act”.

The defendant pleaded not guilty to the charge when it was read to him.

In view of his plea, the prosecution counsel, Ibrahim Mohammed, prayed the Court to fix a date for trial and remand the defendant.

Justice Shuauibu adjourned the matter till May 30, 2022 for hearing on the bail application and ordered the defendant remanded at the Correctional Service.