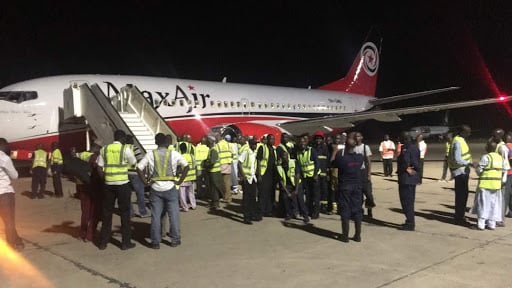 The Emir of Kano, Aminu Ado-Bayero, was among the many passengers on board the faulty plane.

10 minutes after take-off, the aircraft, filled with passengers to the brim, reportedly began to “swerve around the air” until it made a detour for an emergency landing.

The Nation gathered the incident was caused by an “engine failure.”

Max Air had not spoken on the incident yet as at press time.

A palace source, who was also on board the plane, confirmed the incident to newsmen, saying “we smelt death.”

One of the passengers, Dr Samaila Suleiman, said it was “a near-death incident,” as he accused the airline of negligence.

“I heard a strange sound during the take-off but I waved it. I have been flying by aircraft many times but I have never heard such a sound during take-off.

“The sound was strange but I dismissed any strange feeling of insecurity.

“No radio announcement was even made until we saw ourselves back at the airport where we took off.

“It was a near-death experience. I and many other passengers were traumatised. Many of us cancelled the trip and returned home,” Suleiman said.

However, the Emir of Kano, Aminu Ado-Bayero, and some of the other passengers were still flown to Abuja in the same Max Air plane after it was fixed.