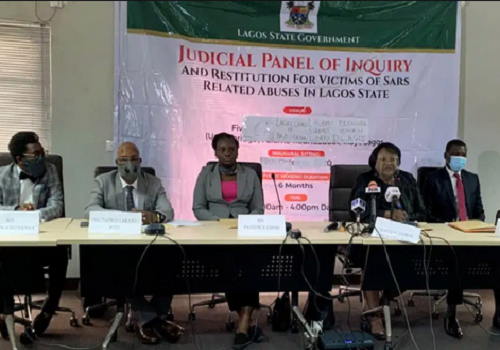 The widow of the late Rasheed Olanrewaju Kareem was awarded N10million for his extra-judicial death, while Yinka Austin Adebayo got N1million for torture at the Police’s hands.

The latest figures raise the total compensations to N68.25 million for 12 petitioners.

For the late Rasheed Olanrewaju Kareem, petition, his brother Olalekan Bankole testified on February 16, that the deceased was shot in the head by police officers from the Area C Command in Surulere.

The incident was said to have occurred on October 21, 2020, during the #EndSARS protests.

The panel found that the police authorities failed to investigate the unjustified shooting of unarmed persons at the Tejuosho and Aralile areas of Surulere in Lagos, as well as the extrajudicial killing of the deceased and other persons.

The Chairman of the panel, Justice Doris Okuwobi recommended that “the Nigeria Police Force carries out an independent investigation into the sporadic and deliberate shooting, to confirm who carried out the shooting” and prosecute them accordingly.

In Adebayo’s petition, the panel awarded him N1m as compensation for his unlawful arrest, torture, confiscation of his car by the police between September 28 and 30, 2017.

The police, the panel held, did not controvert Adebayo’s testimony.

Navy Unveils Recruits For Training School: How To Check Your Name