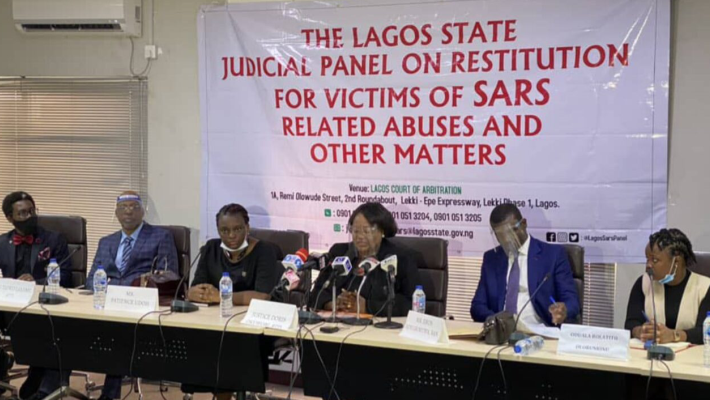 No fewer than 99 bodies of Lagos #EndSars protesters were presented at the Lagos Judicial Panel of Inquiry on Saturday, Peoples Gazette learnt.

They were presented by chief pathologist John Obafunwa who carried out an autopsy on the bodies said to be of slain #EndSARS protesters.

Mr Obafunwa said the bodies were recovered across Nigeria’s commercial hub during the protest that called for an end to police brutality and extrajudicial killings on October 20, 2020.

Several persons were reported dead or missing after the military shooting at Lekki Toll-Gate and other parts of the state last October, although the state and federal government, as well as the military, denied the claims.

Photos presented to the audience via a display unit and sighted by The Gazette indicated that some of the bodies had bruises while others had deep cuts resulting from machete attack or high calibre gunshot wounds.

Three of the bodies were confirmed to be from the Lekki tollgate where soldiers opened gunfire on the protesters, shortly after the state governor, Babajide Sanwo-Olu announced a 24-hour curfew in the entire state.

Initially, the Nigerian Army denied being at the protest ground, stating that videos and photos from the scene were “doctored”, but later admitted their presence and claimed that shots were only fired into the air to enforce the curfew.

A Nigerian celebrity, DJ Switch, recorded a live Instagram session during the melee, showing gory scenes and saying seven persons had died before her device went off. She later asserted that casualty figures rose to fifteen in a later update on the incident.

Many sources, including those from security sources, confirmed to Peoples Gazette that casualties were recorded on the night of the attack after soldiers fired at protesters who sat on the ground, singing the national anthem and waving the Nigerian flag.

But Mr Sanwo-Olu who spoke with CNN after the incident initially said no life was lost, but later claimed that only two persons died.

Amnesty International had also reported that at least 10 civilians were shot dead by Nigerian troops deployed against protesters in the upscale Lagos neighbourhood.

SOURCE: PEOPLES GAZETTE
Kindly Share This
Dear Reader, Fetching good and credible news information is tedious and requires huge finance. We are soliciting support from our readers and fans. For as low as N1,000  you can be a part of our golden membership. Your support would go a long way in assisting us to continue guaranteeing quality news to our readers across the globe. Bank transfers can be made to: Zenith Bank 1014932118 Ireporteronline communications Inquiries: Email: [email protected] Whatsapp: +234 7032341798 FOR BUSSINESS ADVERT CLICK THE WHATSAPP IMAGE BELOW