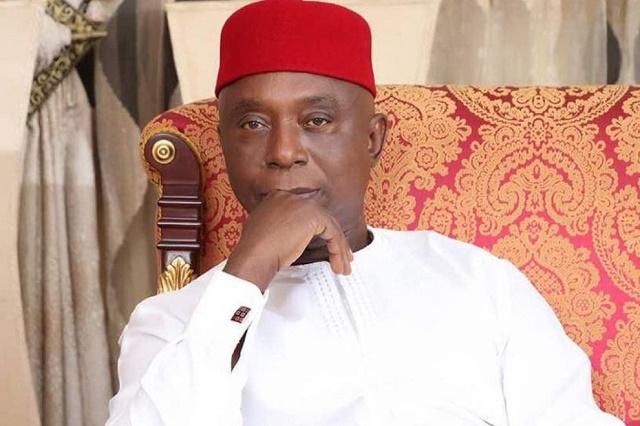 According to Sahara Reporters, A former House of Representatives member, Ned Nwoko allegedly asked the police to arrest and detain a community leader in Delta State, Okey Ifejoku.

SaharaReporters learnt that Ifejoku has been detained for six years.

The elected President-General of Idumeje Ugboko Development Union, Ifejoku was arrested by the Delta State Police Command on the order of Nwoko in 2016.

Nwoko had accused Ifejoku of sponsoring the indigenes of Aniocha North Local Government Area to protest against him and kick against his bid to forcefully acquire their farmlands.

Ifejoku’s son, Nnagoziem, on Thursday told SaharaReporters how his mother visited his father in prison and celebrated her birthday.

According to Nnagoziem, his father is rotting behind bars because he did not support the land-grabbing business of the ex-lawmaker.

“Ned Nwoko is using his political and financial influence to intimidate people in his immediate environment,” Nnagoziem Ifejoku told SaharaReporters.

He said, “Nwoko, who got about 33 hectares of land for free having claimed he wanted to use it for dairy farms, later built a personal estate on it. He was trespassing and hijacking poor farmers’ land.

“The affected people in the community called Owu reached out to Ifejoku to appease Nwoko like a god that he claimed he has been, following their peaceful protest.

“When Ifejoku called for a meeting, Nwoko was in attendance and explained that he had a vision of building a golf course in the community.

“He said the golf course would require 90 hectares of land and that he still wanted another 100 hectares of land for a sports university. That was the reason why he was invading people’s farmlands and destroying them.

“People questioned him about the golf course and he was expecting my father to support him, but he did not. The community said he should do that with the hectares of land that Obi gave him but he was hell-bent on grabbing people’s farmlands.

“He has been tormenting both elders and youths of that community, and that is the reason my father is one of the victims.”

When asked about the role of the police, Nnagoziem said Nwoko used his influence to transfer the case to Abuja.

“But now, it has been brought back to Delta State. The case had not been sorted till the judicial workers went on strike,” he said.