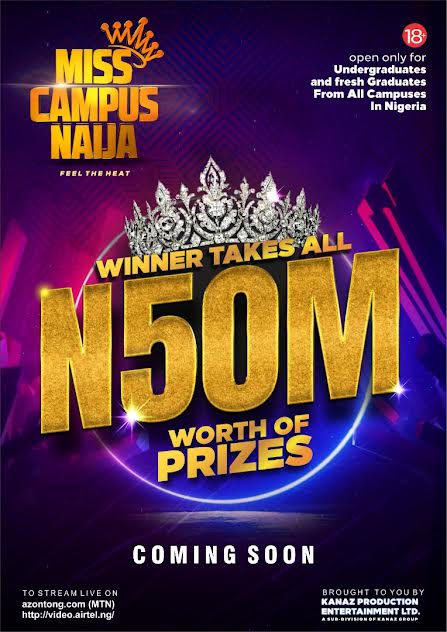 According to organisers of the show, Kanaz Production Entertainment Limited, Miss Campus Naija Reality TV Show would be different from the BBNaija or other reality shows in Nigeria in the sense that it is solely meant for female students in all the tertiary institutions across Nigeria. Besides, unlike the conventional beauty pageant where winners are determined by a panel of judges, the winner, in this case, will be determined by public opinion expressed through voting.

This was disclosed by the Chairman of Kanaz Group, the parent body of Kanaz Production Entertainment Limited, Nnabueze Louis Kanife, on Friday at the media unveiling of the programme. He said the show would celebrate and bring out the best of beauty and brains from young girls on campuses all over Nigeria.

The show which would run for three months is an offshoot of the company’s Campus Affairs TV Show that has been in existence since 2010. He promised that the show would be educative, informative, and entertaining as it is filled with cultures and traditional norms of different nationalities in Nigeria.

He said registration for the show is free and directed all intending contestants to go online and register via www.campusaffairstv.com. On the show, he said: ‘It is designed to be a house of fame for our young undergraduate girls. It is designed to give them the best in life. It will give them a sense of belonging.

‘Once it starts, each contestant will represent a state. Thirty-seven contestants representing the 36 states of Nigeria and the Federal Capital Territory, Abuja, will contest for the star prize of N50 million.

‘After the registration, contestants will start to canvass votes from their families, friends, loved ones, school mates and departments. There won’t be any physical audition; the audition will be through voting. Once you have the highest votes, you will emerge to represent your state.’

On the prizes to be won, he said: ‘The first prize of N50 million is broken down as N25 million SUV, N5 million scholarship, and N5 million plot of land with a C of O plus a monthly salary of N300,000 throughout her stay in school.

‘Second prize winner goes home with N20 million – N5 million scholarships, N5 million plot of land with a C of O and a N200,000 monthly salary throughout her stay in school.

‘Third prize winner gets N10 million – N5 million scholarship and a monthly salary of N100,000 for the duration she will stay in school.’

The programme will be aired 24 hours turnaround on MTN and Airtel online TV and DSTV, among other television channels in Nigeria.

The programme also parades the best of Nollywood players such as Pete Edochie, as eviction moderator; John Okafor (IBU) as house coordinator; Oge Okoye as the face of the show; and Yul Edochie as host/co-presenter. Others include Oyetoro Hafiz as co in-house coordinator and Jide Kosoko as in-house guidance councillor