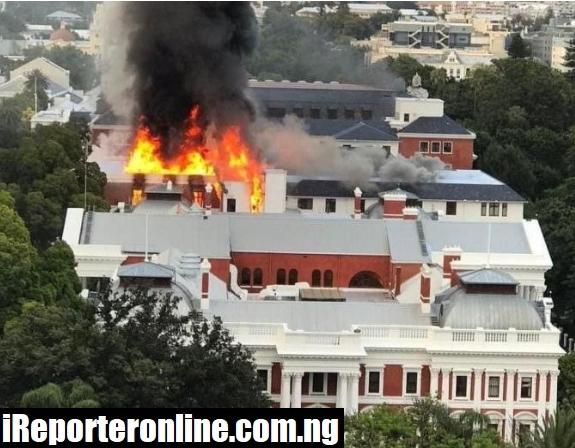 A fire which broke out at South Africa’s parliament in Cape Town has seen an entire floor being gutted by fire, with the roof collapsing.

The fire broke out on Sunday morning January 2, is said to have severely damaged the old assembly wing, including the chamber.

Moloto Mothapo, spokesperson of the parliament said in a statement that the cause of the fire is yet to be ascertained. “Parliament’s Presiding Officers wish to confirm the breakout of a fire on the Parliamentary precinct this morning.

“The cause of the fire has not yet been established and investigations are underway by the relevant authorities.

“The fire has been contained in the old wing. Firefighters are currently trying to control the fire in the New Wing, where the fire has affected the National Assembly Chamber.

“National Assembly Speaker, Ms Nosiviwe Mapisa-Nqakula, and Chairperson of the National Council of Provinces, Mr Amos Masondo, have expressed their appreciation to the City of Cape Town Fire and Rescue Services for their prompt reaction and the work done thus far to contain the fire and limit the damage as much as possible.

“The Department of Public Works and Infrastructure, led by Minister Patricia De Lille, the Deputy Minister of State Security Zizi Kodwa, the South African Police Services and security personnel of Parliament are in the Parliamentary Precinct assessing the situation.

“No person has been injured. The Presiding Officers of Parliament are distressed by this incident and the extent of the damage caused thus far to the precincts of the seat of the national legislature.

“They have urged all relevant authorities to leave no stone unturned in establishing the cause of the fire. The public will be kept updated.” 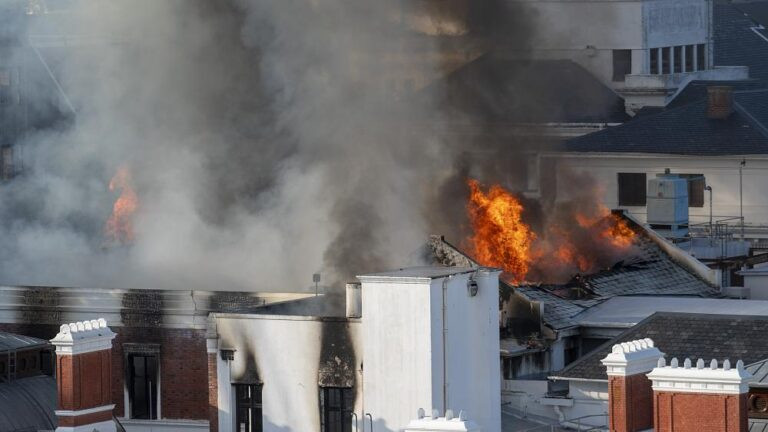 Visiting the scene, South African President Cyril Ramaphosa said a person was “being held and is being questioned” by police in connection with the blaze.

Jean-Pierre Smith, a Cape Town mayoral committee member responsible for safety and security, said the roof of the old building had collapsed and the third floor had been gutted, including office space and the gym.

He also told journalists that the parliament’s fire alarm rang when firefighters were already on site.

Singer Davido Celebrates New Year With His Babymamas, Sophia and Amanda As They Vacation Together in Ghana (Video)