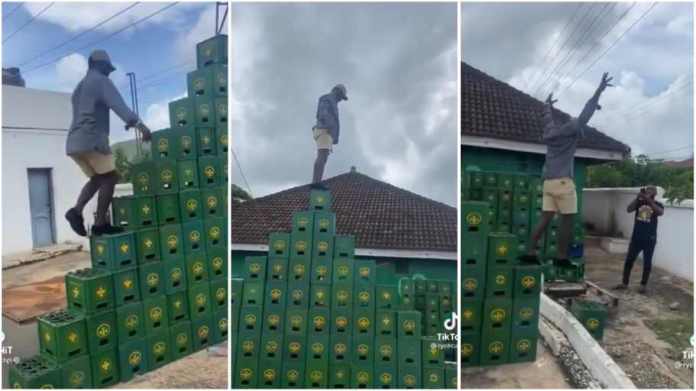 A Ghanaian man has successfully completed the viral crate challenge tower edition in a new video.

In the latest viral challenge, making the rounds on TikTok and other social media platforms, videos of people in the United States and some other countries showed people trying to balance themselves on a pyramid of crates.

In most videos, the person taking up the challenge ended up in what looks like a painful fall onto the collapsing crates, or the ground, as onlookers film the entire challenge on their phones.

Well, A Ghanaian daredevil has set a record with the viral crate challenge with what appears to be the highest level of crates ever attempted in a new video making rounds online.

The man was seen readying himself to take part in the challenge as the video showed the crates he was going to climb.

In the video, the man wearing a long-sleeved shirt over a pair of shorts and shoes was seen beaming with smiles before the daunting task.