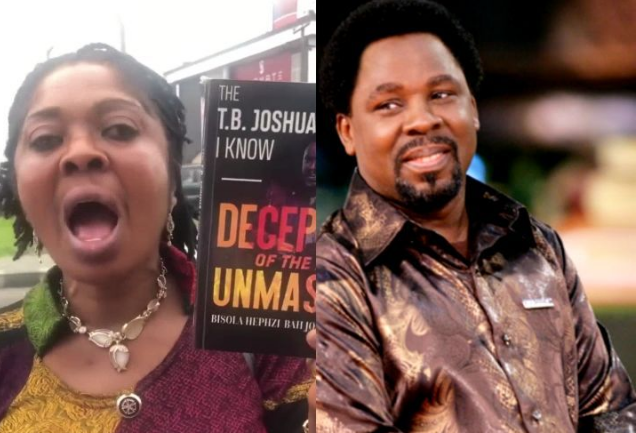 There have been some wild allegations levelled against the late general overseer of the Synagogue, Church of All Nations, TB Joshua.

According to his former assistant, Bisola Johnson, TB Joshua sexually molested her many times during their time together for 14 years.

She alleged that the renowned man of God used to have an s3kz ring which allows him to have his way with young virgins anytime he wanted.

After the death of the general overseer of the Synagogue, there has been so many allegations and information ranging from good to bad that has been generated about him however this fresh one tops it all.

Bisola told Sinai Mountain Radio in the United States, that Joshua was a serial s*sexual abuser. She strongly alleged that TB Joshua was much interested in having intercourse with virgins and young girls.

Bisola said Joshua introduced her into his secret cult of young girls he sleeps with whenever he feels like it.

“It was a service day, I didn’t know he wanted to initiate me on that day. He asked for me and when I went, I didn’t see him in the office that I used to know. I was ushered into his bedroom and he asked if I was afraid, I said no, I was fine. He then hugged me and said, I should go back to work,” Bisola said.

“After 15 minutes, he called me again and this time, I saw him sitting with a white towel around his waist; I was standing at the door and he asked me to come in. I didn’t want to go because I saw his towel had shifted and his manhood was showing.

TB Joshua insisted, dragged me into his bedroom by force; that is when I knew it was intentional. He dragged my hand and placed it on his manhood and started rubbing it.

“In my mind, I was struggling. I said even if such a thing will happen, it shouldn’t be in the house of God. I was very scared for him and thinking God will take his power but not knowing that was the strength of his power,”

“It was like a pride there if TB Joshua called you into his bedroom,” She further alleged he impregnated numerous of those girls and they had to have abortions.

Bisola Johnson, who endured 14 years in that position before fleeing to create her own ministry, believes there are many other victims of Joshua’s abuse who are frightened to speak up.

Bisola Johnson, who endured 14 years in that position before fleeing to create her own ministry, believes there are many other victims of Joshua’s abuse who are frightened to speak up.