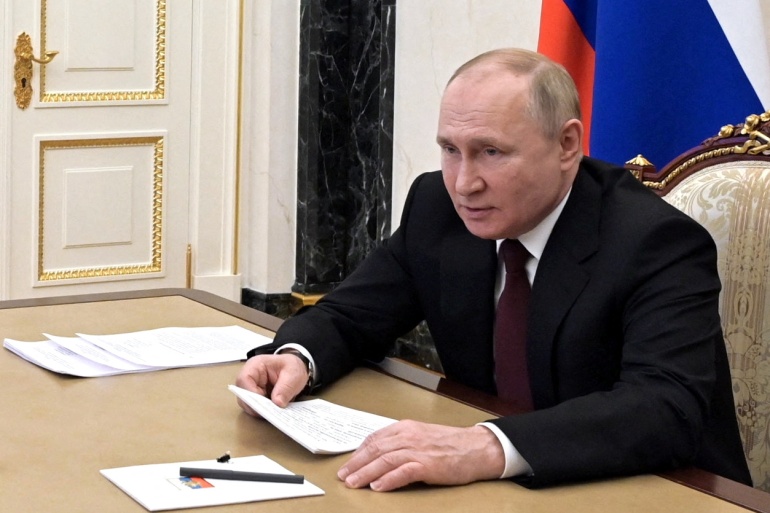 If You Defend Ukraine, You Will Face Great Consequences, Putin Warns US, Britain, Others

Russian President Vladimir Putin has warned other world leaders against interfering with the hostile position on Ukraine.

Russian forces on Thursday unleashed an attack of Ukraine on the orders of Putin, who announced a “special military operation” at dawn, amid warnings from world leaders that it could spark the biggest war in Europe since 1945.

Within minutes of Putin’s short televised address, at about 5 am Ukrainian time, explosions were heard near major Ukrainian cities, including the capital Kyiv, The Guardian UK reports.

In a bid to justify the attack, Putin claimed “A hostile anti-Russia is being created on our historic lands.”
“We have taken the decision to conduct a special military operation,” he said, in what amounted to a declaration of war. He claimed it was for the “demilitarisation and denazification” of Ukraine, echoing a theme of Kremlin propaganda, the false claim that the Kyiv government is controlled by the far right.

“We do not intend to occupy Ukraine,” he said, and he had a chilling warning for other nations.

“To anyone who would consider interfering from the outside: if you do, you will face consequences greater than any you have faced in history. All relevant decisions have been taken. I hope you hear me,” he said.

As Putin was speaking and the first detonations were being reported, the UN security council was holding an emergency session, chaired by Russia itself, which holds the rotating presidency.

It was begun by the UN secretary-general, António Guterres, who made a direct appeal: “President Putin – stop your troops from attacking Ukraine. Give peace a chance. Too many people have already died.”

Joe Biden issued a written statement saying: “The prayers of the entire world are with the people of Ukraine tonight as they suffer an unprovoked and unjustified attack by Russian military forces.

“President Putin has chosen a premeditated war that will bring a catastrophic loss of life and human suffering,” Biden said.

“Russia alone is responsible for the death and destruction this attack will bring, and the United States and its allies and partners will respond in a united and decisive way. The world will hold Russia accountable.”

Other world leaders also condemned the invasion. “I am appalled by the horrific events in Ukraine and I have spoken to President Zelenskyy to discuss next steps. President Putin has chosen a path of bloodshed and destruction by launching this unprovoked attack on Ukraine. The UK and our allies will respond decisively,” said Boris Johnson.

“We will hold the Kremlin accountable,” wrote Ursula von der Leyen, the head of the EU Commission, which had announced new sanctions against Moscow just hours before the attack.