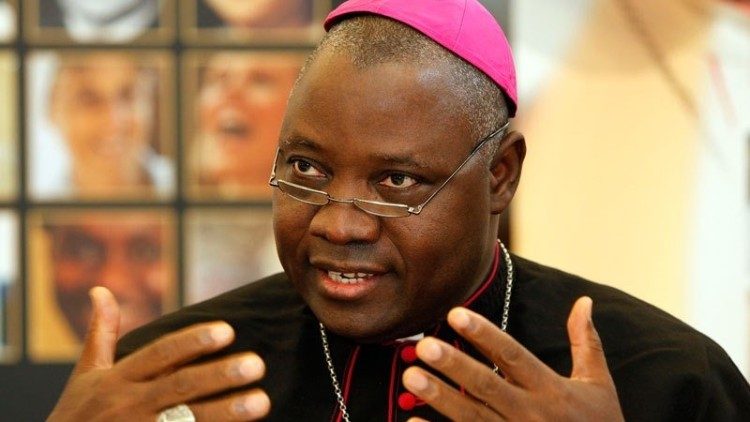 Kindly Share This
The Metropolitan Catholic Archbishop of Abuja Diocese, Most Rev. Ignatius Kaigama, has called on the Spiritual Director of the Adoration Ministry, and a Catholic Priest in Enugu State, Rev. Father Ejike Mbaka, to stay away from politics.

He said this on Friday in Abuja at an interactive meeting with journalists as part of activities marking this year’s World Communications Day celebration.

Archbishop Kaigama said that during Priestly ordination, Catholic Priests take an oath to be obedient and respect their Bishop and his successors.

“This was the oath he took in front of everyone, which means that the oath is valid till you die,” he explained.

According to Kaigama, the Catholic Canon Law 285 forbids Catholic Priests from partisan politics, adding that despite being free to discuss politics, they are not to participate.

He said, “If he is a catholic priest, he must go by what the Catholic church teaches and stands for.

“Father Mbaka is a priest and he should realize that catholic priest is forbidden by Canon Law 285 which prohibits any clergy from engaging in anything that is foreign and unbecoming to the Catholic Clerical state.

“That means we are prohibited from embarking on anything that is alien, strange, foreign to our clerical status and what the Catholic church teaches us, as clergy, we are not allowed to dabble into politics.

“It doesn’t mean we can’t be prophetic in condemning criminality and corruption, we can do that, that is a prophetic mission.

“Partisan politics is not part of our calling. If a clergy embarks on such unbecoming and foreign conduct, the church has a solution and the church knows what to do.”

Also, the clergy rejected the recent coup scare in the country.

“That people are even hinting about military take over maybe is a symptom that something is not right, but I thought it is a vocabulary that would never be mentioned again in the history of Nigeria.

“But if it is being discussed, whether real or imaginary, then it means we need to be attentive, especially those in leadership.

Kindly Share This
Dear Reader, Fetching good and credible news information is tedious and requires huge finance. We are soliciting support from our readers and fans. For as low as N1,000  you can be a part of our golden membership. Your support would go a long way in assisting us to continue guaranteeing quality news to our readers across the globe. Bank transfers can be made to: Zenith Bank 1014932118 Ireporteronline communications Inquiries: Email: [email protected]mail.com Whatsapp: +234 7032341798 FOR BUSSINESS ADVERT CLICK THE WHATSAPP IMAGE BELOW