Former US President, Donald Trump has lambasted President Biden over his chaotic withdrawal from Afghanistan, saying the Taliban’s take over of Afghanistan didn’t happen because the withdrawal plan was bad but because the president in charge of the troop withdrawal was.

“It would’ve been the exact opposite,” Trump told Premiere Networks hosts Clay Travis and Buck Sexton when asked what would have happened if he was in power.

“We were in perfect shape. Abdul – he’s now the head guy – he was the one I was dealing with [when] I said there would be hell to pay if you touch any American soldiers or Americans,” Trump said, referring to Taliban leader and now de facto Afghan leader Abdul Ghani-Baradar.

Trump said Biden incidentally let that idea slip from his tongue when he noted during public remarks that there hadn’t been any U.S. service members killed in 18 months because of the deal struck between the two sides.

When it came to the withdrawal, which left 13 U.S. service members and dozens of Afghan civilians dead from a terrorist bomb blast, as well as untold numbers of stranded U.S. citizens, Trump said that the U.S. would’ve been out in an orderly manner and that Biden should have either destroyed or taken the billions of taxpayer-funded weapons that are now in the hands of the Taliban.

“I said I want every nail, every screw, every tank, every plane –  those planes are in very good working order – you look at Apaches they coast a fortune – tens of millions,” Trump said, adding that he was embarrassed to see Taliban militants riding in American military vehicles and aircraft.

Trump also ripped Biden for showing “disrespect” to families of the 13 fallen service members by looking at his wrist watch during their funeral over the weekend in Delaware.

“The parents are angry, as they should be,” he said. “Nobody should’ve been killed [but] after I got out, Abdul and his group went wild 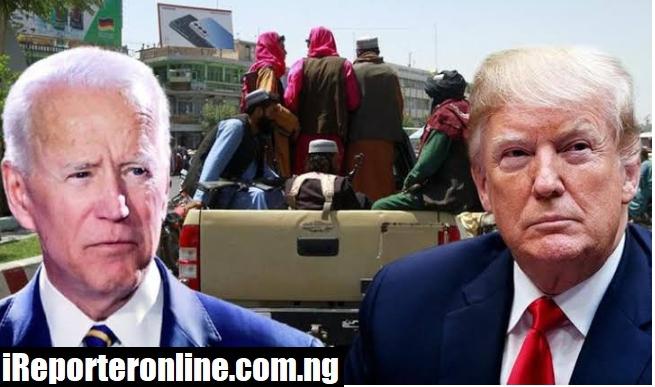