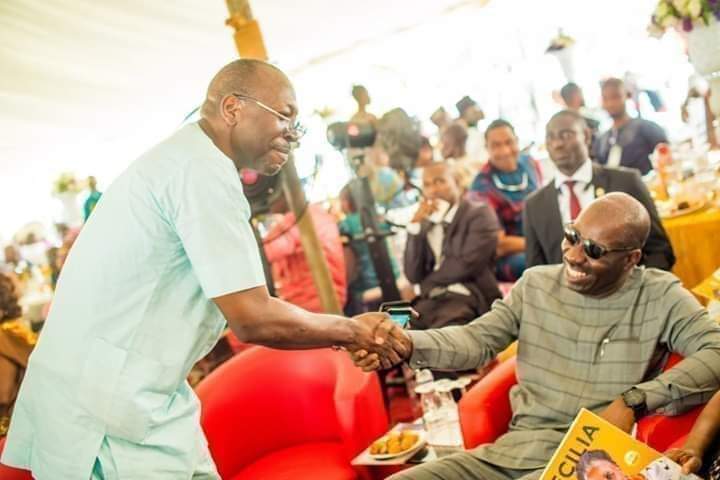 Candidate of the All Progressives Congress (APC), in the September 19 governorship election in Edo State, Pastor Osagie Ize-Iyamu, has congratulated the winner of the election, Governor Godwin Obaseki of the Peoples Democratic Party (PDP).
Ize-Iyamu in a letter he addressed to Governor Obaseki, on Monday, also conceded victory, having failed at every avenue to upturn the  result of the election at the tribunal, Appeal Court, and finally at the Supreme Court.
He, however, made passionate appeal to Governor Obaseki to kindly consider the case of the 14 lawmakers-elect who absconded from the House and refused to be sworn-in, following a disagreement over who should be elected Speaker.
He went further to beg the Governor to intervene in the issue of elected Local Government Chairmen, Vice-chairmen,
Councilors and Supervisory Councillors, who were suspended and removed from office.
Read the full text of Ize-Iyamu’s letter to Obaseki:
“
Your Excellency, CONGRATULATIONS.
“Last Friday’s judgement of the Supreme Court, puts an end to the series of litigations we had over last year’s governorship elections.
“For the records, Your Excellency, your supporters had instituted thirteen (13) different pre-election cases against my deputy and I; all seeking to disqualify us from participating in the election. On our part, our party, the APC had only one case against Your Excellency and your party.
“We also deliberately did not go to the Elections Tribunal, not because we did not have issues but because we felt it was better to allow you face the job at hand, moreso as our party at the National level had congratulated you.
“We are happy that all these cases have come to an end. Now that it is all over, please accept my congratulations.
“Having said that, I want to appeal to you to kindly consider the pertinent issues of  the 14 constituencies, including the two in your local government – Oredo and the two in your deputy’s local government – Etsako West, that are presently without representation at the Edo State Assembly.
“Though the matter is in court, you are in a vantage position to consider an out-of-court settlement of the issue, in the overall interest of our state.
“Your Excellency would also do well to intervene in the issue of elected Local Government Chairmen, Vice-chairmen, Councilors and Supervisory Councillors, who sometime ago, were suspended and removed from office.
“Our appeal is that you consider paying them their entitlements since it is now late for them to return to their offices. This can also be through the out of court settlement.
“Your Excellency, for us in the APC, as the opposition party in the state, we have a duty to ensure that your government does the right thing always.
“Once again, I congratulate Your Excellency and I wish you well.”
Related Topics:
Up Next