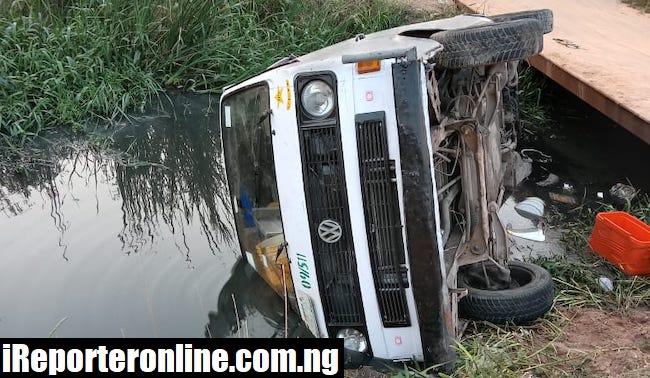 The Lagos State Emergency Management Agency (LASEMA) said Monday evening the auto crash that occurred near the Iyana-Oworo end of the Third Mainland Bridge was caused by carelessness on the part of the bus driver.

A child was confirmed dead and several others injured when the fully loaded bus lost control and plunged into the canal in the area.

The LASEMA General Manager, Dr Olufemi Oke-Osanyintolu, who confirmed the incident in a statement, said information gathered at the scene of the incident revealed that the driver of the bus with number plate LSD 184 XV, lost control while trying to cross a mini bridge, fell sideways and got stuck.

He said the occupants were rescued with minor injuries while a 20-year-old lady who sustained critical injuries was rushed to a nearby hospital.

“On arrival at the above scene, a white Vanagon with registration number LSD 184 XV was discovered to have been involved in a lone accident.

“Further information revealed that the accident was due to carelessness of the driver who lost control while trying to cross a mini bridge.

“The bus fell sideways into the small ditch and got stuck.

“The occupants were rescued with minor injuries while a lady of about 20 years of age who sustained critical injuries was rushed to a nearby hospital.

“Responders present at the scene include the Agency’s LRT, LASTMA, and police.

“The affected vehicle has been recovered from the ditch with the aid of the agency’s towing truck and handed over to police officers at Alonge Police Station in Oworonshoki.”