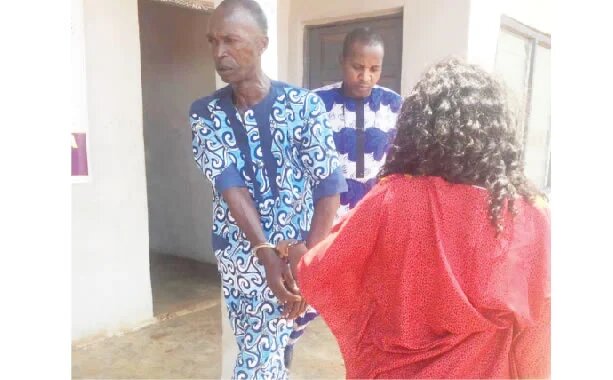 The family of a woman, Ugieki Asemota, has urged the Edo State Police Command to prosecute her husband, Emmanuel, for allegedly beating her to death for refusing him sexual intercourse.

PUNCH Metro gathered that an argument ensued between the couple at their residence on Abaegbe Street in the Evbotubu area of Benin on Monday, June 28, 2021.

Our correspondent learnt that Ugieki entered her room and locked the door to avoid issues with her husband.

However, Emmanuel, who persisted in entering the room with her, allegedly tried to break the door with an axe.

While Ugieki attempted to escape through the window, her husband was said to have accosted and beat her to a coma.

The victim’s twin sister, Victoria Omoruyi, told our correspondent that Ugieki was rejected by two hospitals before she was admitted to the third hospital she was rushed to.

She noted that the marriage between her sister and the suspect was fraught with violence.

Omoruyi said, “They had been having issues before that day and the man was always beating her. But on that night, he wanted to have sex with her and my sister said he should go to his room because she was not ready for his trouble.

“They quarrelled that day and my sister managed it till the evening of the following day. When it became intense, she entered her room and locked the door to avoid any trouble with him. But around midnight, he came banging the door with an axe and asking my sister to open the door that he wanted to sleep with her.

“Her husband accosted her by the window, dragged her down and hit her head on a block that was beside the window while he continued beating her. My sister pleaded with him that she was losing her strength, but he didn’t answer her till she became unconscious and he left her for dead. Their tenants could not come out for fear that Emmanuel would turn the fight against them.

“When the tenants realised that they could not hear any noise again, they came out to rescue my sister and took her to a hospital. She was rejected at the two hospitals she was taken to before she was admitted to the third hospital.  When we got to the hospital, we were asked to do some tests and scans. It was around 2 pm that she opened her eyes and talked, but she could not turn or raise her fingers.”

Omoruyi explained that after spending some days at the hospital, the victim was taken to the University of Benin Teaching Hospital, where she was placed on oxygen till she died on July 7.

Our correspondent learnt that the family reported the matter at the Evbotubu Police Station and the police arrested the suspect.

The state Police Public Relations Officer, Kontongs Bello, who confirmed the incident, said the suspect would be charged to court at the end of the investigation.

He said, “The couple were married in 2002 and had two boys together before she died. The woman denied him sex and he beat her to a coma. When we finish our preliminary investigation, we will charge him to court.”