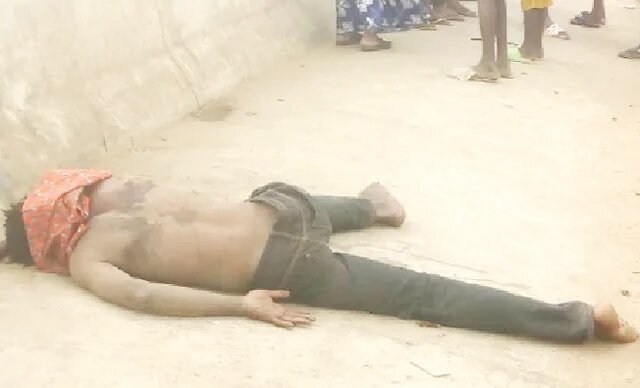 An alleged mentally unstable man has been beaten to a pulp by residents of Mowe in the Obafemi Owode Local Government Area of Ogun State for allegedly being in possession of a huge sum of money and three phones.

It was gathered that the suspect, who stays under the bridge in the area on the pretext of being mentally unstable, was on a call with an unknown person on Thursday when the residents caught him.

PUNCH Metro learnt that when he was asked by the residents where he got the phone from, he could not give a satisfactory answer.

An attempt by the man to escape was prevented and checks on his belongings revealed the sum of N250,000, three iPhones and women underwear, which made the residents to beat him to a pulp.

An eyewitness, who identified himself simply as Ade, said he and his friends were placing a bet under the bridge when they saw the suspect making a phone call.

He said, “I was playing lotto with my friends under the bridge when we noticed that the supposed mentally unstable man was making a call; I tried to move close to him, but when he saw that I was coming, he tried to escape.

“My friends on the other side of the road, who were watching us, crossed the road to join me and we asked him to sit down and searched his bags and found three more phones, the sum of N250,000, and pants and bras belonging to women.

“He had been at the Mowe bus stop for long and when some passers-by saw what we found on him, they pounced on him and beat him. We later handed him over to the police, but policemen at the Mowe Police Division said they could not accommodate a lunatic in their station. Only God knows who he was calling.”

A trader in the area, identified simply as Yetunde, said the suspect was beaten when he refused to disclose who he was talking to on the phone.

She said, “When he was asked who he was talking to, he refused to talk; it was the annoyance that made people to start beating him and wondering where a lunatic got such amount of money, phones and women pants and bra from. This is an eye-opener to everyone in Mowe. Only God knows how many atrocities he has committed in Mowe.

“Probably he is working with ritualists because I don’t know where he got the money and the phones, and maybe the underwear belongs to women he raped or killed and sold their body parts.”

When contacted, the state Police Public Relations Officer, Abimbola Oyeyemi, said he would find out and get back to our correspondent, but he had yet to do so as of the time of filing this report.