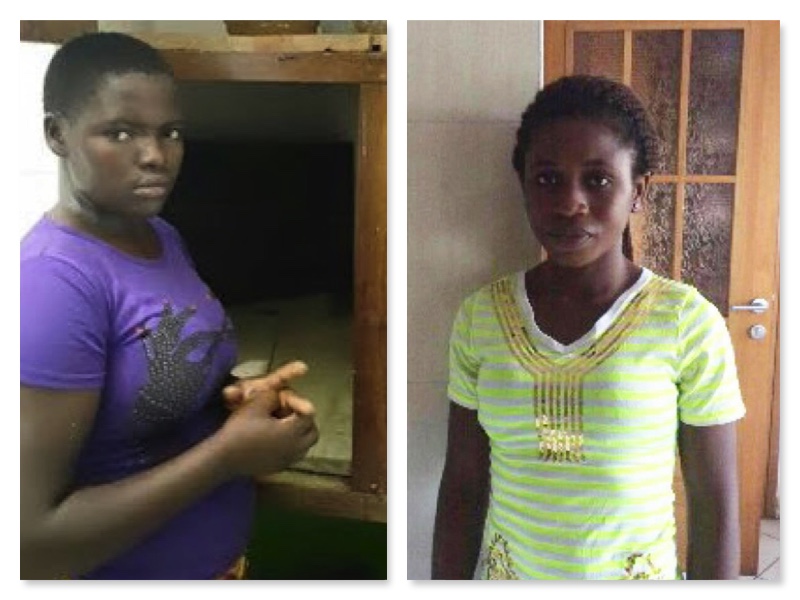 Kindly Share This
Two Lagos housemaids, probably from hell, were docked at the Igbosere Magistrates’ court on Tuesday, charged with defiling their employer’s daughters.
The sexual assault was done with their fingers and wooden sticks, causing their victims severe injuries. The maids, from Benue state, were identified as Peace Sunday, aged 19 and Bose Augustine aged 18. Their pleas were not taken, when the case was mentioned in court today.

They were charged with three counts of unlawful and indecent penetration sexually into the virginal and anus of two girls, a two-year-old and a 17-year-old, with fingers and wooden sticks.

The presiding Magistrate in charge of emergency cases at the court, Mrs Doja Ojo, ordered that the accused persons be temporarily remanded at the police station pending advice from the office of the Directorate of Public Prosecution, ( DPP).

The maids were arrested by the Police at the Ilasan Division, Lekki, following the complaints of the parents of the
their two victims.

The investigation led to the charge at Igbosere Magistrates’ Court.

Police Prosecution Counsel, Inspector Peace Chukwudi told the court that the accused persons committed the offence in Lekki Garden Horizon 2 Estate, Lekki, where they work and live with the two complainants.

Chukwudi informed the court that the parents of the victims reported to the Police that they left their daughters aged 2 and 17 in the care of the accused persons and went to work.

Before they returned their maids allegedly defiled their daughters with fingers and wooden sticks and in the process inflicted severe injuries on their private parts.

Chwkwudi said that following the report, the Police referred the victims to Mirabel Medical Centre for examination.

The medical report, she said, revealed that the accused persons had defiled the victims several times with fingers and wooden sticks.

She said the offences the accused persons committed were punishable under sections 411 and 261 of the criminal law of Lagos State, 2015.