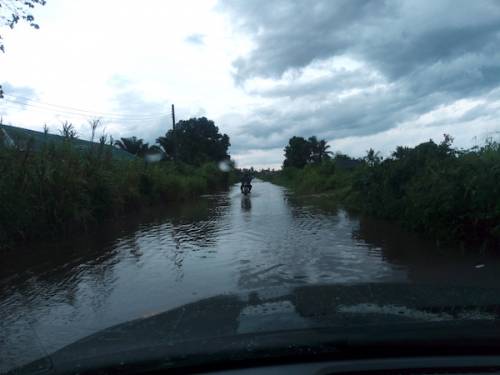 People of Oke-Isoko in the Isoko North Local Government Area of Delta state have taken a swipe at the state governor, Ifeanyi Okowa and his political ally, a one-time House of Assembly member, representing Isoko South constituency 1, Ross Uredi, as a newly built road in the community becomes impassable each time it rains.

The Okpe-Isoko Road project, SaharaReporters, gathered was awarded in 2018 at a whopping sum of N850 million by the state governor, Ifeanyi Okowa to Runscon Limited, owned by the governor’s ally, Ross Uredi.

The project was recently completed and awaiting inauguration when it was submerged by rising rainwater after a downpour last weekend.

Our correspondent, who visited the community during the downpour observed that the road project was submerged by water, making it difficult for motorists as well as local farmers to use.

Speaking with our correspondent, a cross-section of Okpe-Isoko indigenes, lamented the quality of the road, describing it as a ‘shoddy job, given by paddy to paddy’.

An indigene of the community, who simply identified himself as Oruaro, said, “When Governor Okowa awarded this road to Ross Uredi, we just knew nothing good would come out of it.

At a point when the project was ongoing, we discovered some defects and it was a war between us and Uredi. Because he is a very close friend of the governor, he never bothered to retrace his steps and do a quality job.

“Even at a point, the contractor, Ross, went after some of our youths who were clamouring for a standard job. All our efforts, cries and calls on the governor to redirect his friend, Ross, on the need to do a standard job, were useless. Okowa turned deaf ears to all our calls.

Today, the same road is impassable once it rains. You can see for yourself, this is a newly constructed road awaiting Okowa’s inauguration flooded as if it is a lake.”

A community leader, who spoke on condition of anonymity for fear of being harassed and attacked by people loyal to the contractor, described the road project as “nothing but a sham and food for the boys”.
“More or less kola nut contract from paddy paddy to a loyal paddy paddy.

This road project almost caused a serious crisis in our community among indigenes. Some loyal to the contractor were against those calling for a standard job,” he said.

Speaking with our correspondent, a director at the state Ministry of Works who also spoke on condition of anonymity as he was not authorised to speak on the issue, said, “The firm that handled the execution of the project, Runscon Limited, did a very poor quality job but because of his closeness to the state governor, our hands are tied. We have received a series of complaints from people in the community.

“Even on our own, we have visited as well and we saw those defects being complained about. However, all our efforts to see that a standard job was done failed.

Because we are also afraid of the contractor’s closeness to the governor. The contractor is Ross Uredi and if you watch well, he’s always the number three man sitting beside the governor in any event as the case may be. The road project covers about 2.7km.”

Last year during a press conference by Governor Okowa, the attention of the governor was drawn to the shoddy jobs being carried out by the contractor on the road, but the governor reacted, saying, “It is possible that when you have so many jobs that are ongoing, it is possible to have a few defects.

It is possible to have people who are contractors but may not be standard enough.”

Efforts to reach the contractor on the phone for comments were not successful as he did answer calls to his phone. He also did not reply a text message sent to his mobile line.