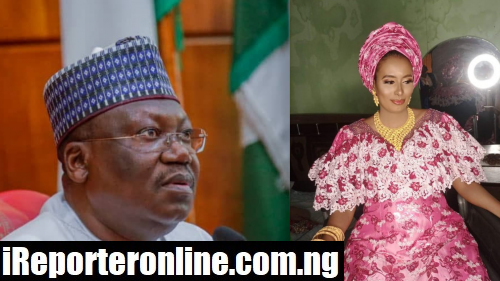 Despite claiming Nigeria is broke and should keep borrowing to fund critical infrastructures, the President of the Senate, Ahmad Ibrahim Lawan has splashed over N100m on his new wife, Zainab Algoni Abdulwahid.

SaharaReporters had reported how Lawan secretly married Zainab at a very private ceremony in Borno State on Friday.

The low-key marriage was solemnised at the Sheikh Sharif Ibrahim Saleh’s mosque in Maiduguri.

SaharaReporters gathered that the event was performed secretly to avoid public criticism while Zainab is expected to relocate to Abuja on Sunday.

A source close to Zainab told SaharaReporters on Saturday that the Senate President gifted her N100 million a few days after they were introduced to each other.

The bride was said to have bought three houses in Maiduguri out of the money.

“Lawan personally gave her N100 million days after he saw her pictures. The money was so huge that Zainab bought three houses here in Maiduguri,” the source said.

SaharaReporters had reported how leaks from the roof of the National Assembly building disrupted the plenary session on Tuesday.

The incident, which followed a downpour, occurred at the ‘White House’, the portion of the Assembly housing both upper and lower legislative chambers.

Many lawmakers were stranded for some minutes before the rain subsided. The lobby of the Assembly became impassable while cleaners were immediately mobilised to clear the pool.

One such was the approval of N37 billion by President Muhammadu Buhari in 2019, which sparked outrage among Nigerians.