INGRATITUDE: When Jesus healed the 10 lepers in the Bible, only 1 came back to say thank you. We all know what happened to the other 9 lepers.

Gov. Godwin Obaseki has sponsored a case against PDP LGA Chairmen in Court seeking their removal on the back of purported appointment letters issued to them on the 1st of April, 2020. 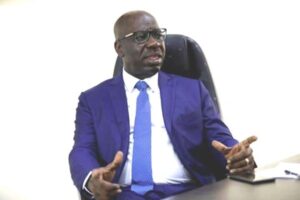 They have cited the section of the PDP Constitution stating that upon acceptance of specified Government appointments they are deemed to have resigned their positions as Party Officials.

MY WORRIES FOR GOV.GODWIN OBASEKI:

I wonder who his Advisers are, I really hope the implications of these actions are clear to them. Information reaching us states that the so-called appointment letters were dated April of 2020.

Was Gov.Godwin Obaseki in PDP in April of 2020?

One could not find any acceptance letter, accepting such appointments from his Government by the LGA Chairmen until now.

If they had been appointed as of April 2020 as stated by the Claimant, are they the same Party Chairmen that led their various LGA’s to nominate Gov. Godwin Obaseki at his own nomination as PDP Candidate at Ogbe Stadium in June of 2020?

How many more fictitious appointments were issued with dates before Godwin Obaseki came into the PDP?

How many ghost contracts were awarded to raise election funds?

How much was moved from Local Government accounts to fund political crisis as well as second term bid?

How many people were paid with public funds in his desperation to achieve his second term bid?

All of these and many more will be determined by the Court of Law, Financial Audit Experts, Financial crime agencies and Independent Corruption practices depts in the fullness of time.

WICKEDNESS: 1 Kings 3:26. The wicked woman who did not go through the labour of birth suggested to King Solomon that the Child be split into two. While the actual owner of the child who knew what 9 months of pregnancy were and hours of labour refused to have the child killed.

king Solomon eventually ruled that the child be given to the woman who laboured for the child and sent out the wicked woman who wanted the child killed.

Gov.Godwin Obaseki wanted the Excos of PDP dissolved to enable him put his APC people who came with him into PDP that will transform him to godFather. (godFatherism which all Edos joined him to fight against) a mission that failed at the 2021 PDP National Convention.

Edo Governor Obaseki has now gone to court to seek the Party Chairmen’s removal after which he will move onto the State PDP Chairman and his executives.

Mr Governor: Is this how to pay back people who received you when you were driven out of APC, they worked for you to win your elections?

Like King Solomon, the PDP NWC and Governors Forum said those that have been duly elected will serve out their tenure and further dissociate themselves from any form of illegal harmonization/Integration.

Only time will tell as Godwin Obaseki moves to open his own can of worms.

Oh No!! Another Building Collapses In Lekki (Photo)