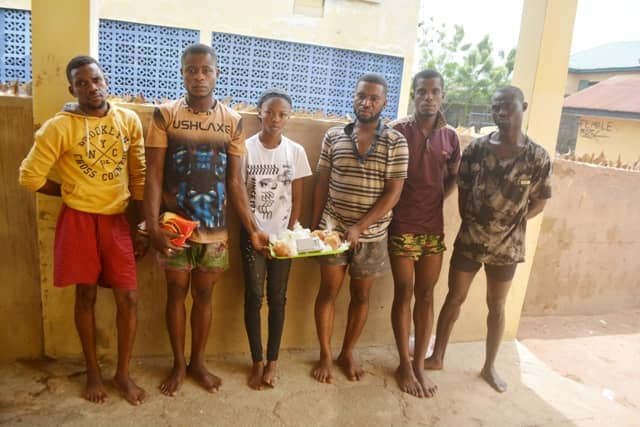 Spokesperson of the command, CSP Mike Abattam, who disclosed this in a statement on Monday, July 12, said the arrest followed a ceaseless raid on IPOB/ ESN Camps all over the State and its environs and the successful neutralisation of the suspects by the Command.

“The remnants of the drug suppliers /distribution syndicate were on 7/8/2021 at about 1130 hours smashed by the ever active tactical teams operators of Imo State Police Command, following a diligent technical intelligence gathering that led to the arrested of one Obinna Ohaji ” M ” age 28 years, who disguised as a driver in search of passengers in a Nissan Caravan bus with the inscription ” ENDLESS GOD ” and registration number ABUJA,  KUJ 88 XC and in the company of one Samuel Egwi ” M” age 36 years along Warehouse bus stop Owerri, Imo State,” he stated.

“He then voluntarily led the command’s tactical teams to the border between Imo State and Rivers State where the receiver, one Princess Samuel ” F” age 17 years was arrested. She confessed to be the one who supplies the Rivers State axis of the terror group and led the tactical teams to the house of the drug Baron at  Umuaka in Njaba local government area of Imo State, where one Nnamuka Uchenna ” M” age 32 years was arrested,” the statement read.

“On searching his premises more quantities of the white substance suspected to be cocaine and the scale for measuring the quantity to be sold were recovered to the station.

“They are believed to be the ones who distribute the drugs to the various terror Camps in the state. Meanwhile, the investigation is still ongoing to trace the source of the hard drugs into the state and also to arrest other members of the syndicate in hiding,” he added.

JUST IN: Gunmen Kill 3 Policemen, 2 Others In Anambra