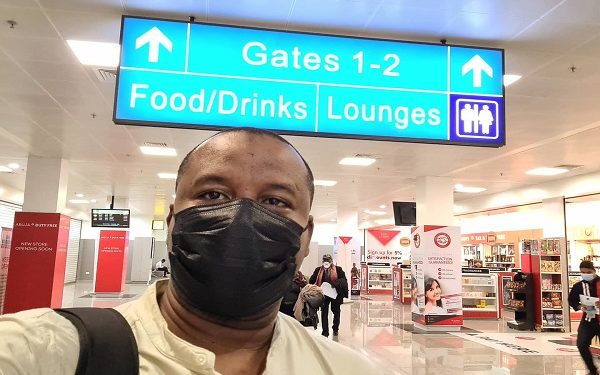 The Nation had reported Ganduje relieved Tanko Yakasai of his appointment over continued unguarded comments and utterances deemed contrary to the stand of the All Progressives Congress (APC) government which he was serving.

Yakasai was earlier suspended by Ganduje after his remark on Buhari during the #EndSARS protest but was reinstated weeks after.

In February, the ex-aide called on President Muhammadu Buhari-led administration to either deal with bandits or resign.

Yakasai was picked up by Department of State Services (DSS) shortly after his criticism.

Bur the DSS said he was picked due to “issues beyond the expression of opinions on social media”.

In a tweet on Wednesday, Yakasai, popularly known as Dawisu, said “goodbye” to Nigeria.

While he did not indicate where he was heading to, he shared images of himself at the airport about flying out with Qatar Airways.

His post elicited a flurry of reactions on social media.

@Olufemiloye said: “Lmaooo! Aiki! Whether it’s a short vacation, temporary, or permanent japa, the message here is that Dawisu can pick a passport and leave when push comes to shove.

“You that you’re joining them to defend incompetence, when the incompetence comes for you, do you have an exit plan?”

@manmustwack said: “This clown, after hailing impunity for years, couldn’t take the shit he served. Coward.”

@Ifeoma__N tweeted: “After supporting this terrible government – you pick your bags and leave. I hope those who support him are seeing this.

@DrOlufunmilayo said: “Now that Dawisu has lost the government job, he has gotten on the next Airplane out of Nigeria.

“This is someone who was an aide to Kano Governor Ganduje and his father was a special assistant to President Shagari in 1979. Yet some APC idiots here are telling people not to japa.

David Hundeyin said” “Dawisu’s surname is Tanko-Yakassai. His father is literally one of the owners of Nigeria. I’ll be happy to be wrong but this strikes me as a stunt.”

“If you are not in government, the best way to love and appreciate Nigeria is from outside Nigeria. FACT” @novieverest tweeted.