Lack of furniture at Gbaranowei Grammar School, Okolobiri, in the Yenagoa Local Government Area of Bayelsa State, has forced students of the school to sit on the bare floor to learn and take their examinations. 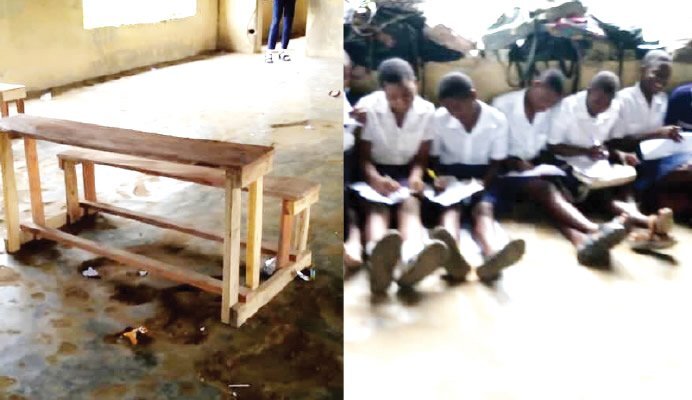 The school, which was established in 1973 with a boarding facility for boys and girls, is the alma mater of the Minister of Transportation, Rotimi Amaechi, and the state Commissioner for Information, Orientation and Strategy, Ayibaina Duba.

Our correspondent, who visited the school on Monday, observed that two classroom blocks had deteriorated badly without ceilings, seats, doors and windows.

Several students were seen sitting on the floor to take their promotion examinations, even as the walkway was dilapidated.

PUNCH Metro gathered that the challenge of lack of seats in the school worsened after a flood in 2012 destroyed many chairs, as the few available now were provided by the Parent-Teacher Association.

In the SSS 2B classroom, there were just 11 chairs that could sit three students each of the 79 pupils in the class. The school has a total student population of over 2,000.

The staff room was no better, with not more than eight tables and chairs, while many of the teachers stood.

The Commissioner for Information, Orientation and Strategy, Ayibaina Duba, explained in an interview that the government was aware of the situation and steps were being taken to address it.