A Nigerian man has been left stunned in amazement after finding a plantain inside the fish roll he bought on a Lagos road.

The man, whose name is yet to be identified as at the filing time of this report, shared the video of what he found inside the fish roll he bought.

In the video shared, a fried plantain was used as fish.

”This thing wan make me kolo, forget this jam. These people put plantain inside wetin, e be like lipstick’ the distraught man said;

@official_bolips wrote; ‘Open the plantain e be like say na there the fish dey’

@lerry_vibes wrote; ‘People no get fear of God shaa’

@viitalys_chieshe wrote; ‘@iamisaacjon wetin we no go see for Lagos’

Kindly Share This
Nigerians are currently mocking popular preacher and Activist, Reno Omokri, after a newspaper company, TheWillNigeria, exposed his “cheating scandal” with his mistress in London.
TheWillNigeria also revealed that Reno and his secret lover have welcomed a child together in London, shortly after welcoming his fourth daughter, whom he named after former President of Nigeria, Goodluck “Ebele” Jonathan.
According to the newspaper company, Reno doesn’t provide for his family members, yet he claims he gives back to orphanage homes.
“Tope Omokri nee Onuwaje, a school teacher in the city of Antioch, a small town in northern California, where they also live.
“THEWILL investigations revealed that the controversial former aide, two years ago abandoned Tope for reasons best known to him. They lived as man and wife in that city with their three children.
Reno, who recently initiated #harassbuharioutoflondon, was only able to do so conveniently because he absconded to London where his new partner lives, contrary to his narration of flying out to London from California for the cause.
“He has allegedly refused to contribute to the upkeep of his family, one of whom is a special needs child.
This is beyond absurdity for a man who claims to have single-handedly built an orphanage in Edo State and is always quick to donate money to other people in need.
Even the Holy Bible, to which he often makes reference, describes a man who is unable to cater for his family as worse than an infidel.
“A control freak, Reno allegedly subjected his estranged wife to emotional abuse for the better part of the 14 years they lived together.
The former presidential aide, who is never short of an opinion on virtually every subject on earth and everyone, including a recent statement about not having sympathy for single mothers except they are victims of rape or domestic violence, needs to reveal the full identity of the woman in the publication to the people he projects his self-righteousness too.
Does he now have two wives? We sure know he has not divorced Tope because our reliable sources say they are still legally married.
So we ask! Why did he abandon his family in the first place?”
Kindly Share This
Continue Reading 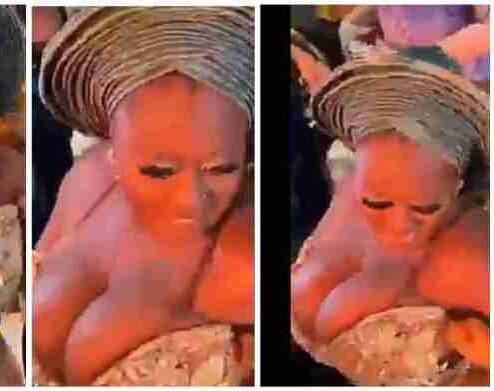 Yet to be identified lady literally brought a wedding to a standstill with her feminine features accentuated by her huge melons and wild dancing skills.

She made sure her steps were irregularly calculated and her huge melons did all the talking for her in her beautiful indigenous-themed dress.

The lady believed to be in her early 30s caught the attention of everyone as she danced to every song the DJ dropped at her friend’s wedding and we are sure even the groom felt uncomfortable when in his attention was drawn to the drooling spectacle. 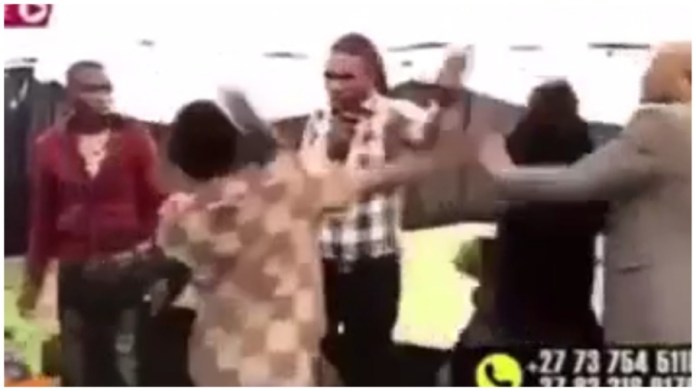 A pastor is fast going viral on social media following his style of deliverance on his church members.

There was drama after a man of God lost his cool and slapped one of his congregants during a service.

In a video shared online, a middle-aged man is seen confessing how he stole money with his brother and instead of sharing the stolen money equally, he snitched on him and he was arrested, sentenced, and jailed.

The man went to the church to repent and seek forgiveness for conspiring against his brother.

While the man was confessing his evil deeds in the pulpit, the pastor lost his cool and gave him a hot slap.

The man of God wondered how someone in his right senses can do such a thing to his blood brother, prompting him to inject some sense into the man’s brainless head through a hot slap.

Ushers had to restrain the infuriated man of God before more damage was done.