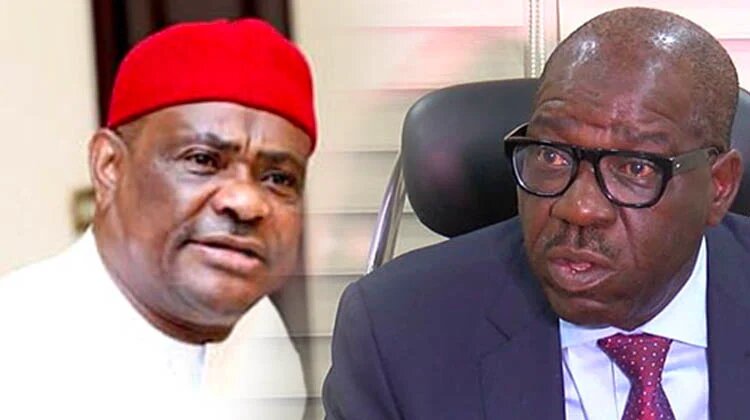 There are strong indications that the political difference/rivalry between Governor Nyesom Wike of Rivers State and his Edo State counterpart, Godwin Obaseki, may not have abated as the former shunned the Edo State Government House while in the state, on Thursday, to fan his presidential ambition.

Wike was in Benin as part of his meetings with delegates of the Peoples Democratic Party ahead of the party’s convention to pick its presidential candidate for the 2023 presidential elections.

He also did not visit the state party secretariat but was at the palace of the Oba of Benin and then met with the party’s delegates at the residence of the late former Chairman of the Board of Trustees of the PDP, Chief Tony Anenih.

At the palace of the Oba of Benin, Wike said if elected as president, he would focus on checking insecurity with massive investment in intelligence gathering. He noted that it is only in a secured environment that economic activities, agriculture and investment in infrastructure can thrive.

In his words “I was here one and a half years ago as the DG of the campaign for the re-election of Governor Obaseki but I am here today not on behalf of anybody but of myself and my team to seek your prayers.

“I have come to Benin to talk to the delegates of our party that will be part of our national convention on May 28 and 29. The way our country has fared, Nigeria needs somebody that will see white and say it is white and will see black and say that it is black. If the PDP gives me the ticket, I have enough experience to tackle Nigeria’s mirage of problems, having been a local government chairman, Minister of State overseeing Education and now governor.

“The major issue confronting Nigeria today is insecurity and without security no other activity can function and what we need to tackle insecurity is intelligence gathering which is lacking, we are not going to sit down and give excuses but we will take action and spend resources to gather intelligence.”

On his part, the Oba of Benin, Omo N’Oba N’Edo Ukuakpolokpolo, Ewuare II, while lauding the competence and capacity of Wike based on what he has done as Governor of Rivers State, urged political leaders to promote and ensure the sustenance of African culture and traditions, which he said the colonial masters tried to erase after discovering that Benin Kingdom and others had a superior administration and civilisation to theirs.

On Wike’s ambition, he said: “Wike is our son, we love him and if I say so, I believe I am speaking on behalf of our ancestors. We will keep praying for him so that he does not come across anybody that will mislead him, that will mis-inform him and may he and his family not come across harm,” he added.