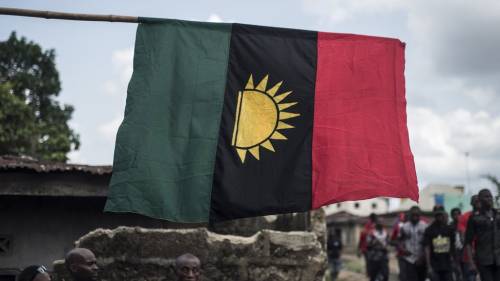 TENSION is mounting in the five states of the South-East zone of the country as the sit-at-home order issued by the proscribed Indigenous People of Biafra (IPoB), a self-dermination group, takes effect today.

IPoB, led by Nnamdi Kanu, had issued the no-movement directive to mark what it termed the Biafra Day, a reference to May 30, 1967, the day the General Yakubu Gowon-led Federal Government declared a full-blown war with the then Eastern Regional Government headed by the late Emeka Odumegwu Ojukwu, for declaring the section of the country an independent nation to be known as the Republic of Biafra. Already, various state governments in the region have reacted to the directive by IPoB, with warnings to trouble-makers to stay off the zone.

Governor David Umahi of Ebonyi State, for instance, had, in a statewide broadcast on Saturday threatened to seize any shop which owner refused to open today, in deference to the IPoB order, just as he ordered security agents to shoot at sight anyone trying to attack security personnel.

In Imo State, some 48 hours to the D-Day, commercial and social activities were paralysed on Saturday, as security personnel began to shoot indiscriminately as a show of strength, to warn IPoB members of the readiness of the government to protect the citizens.

IPoB had, however, insisted that though it shifted the day from May 30, being a Sunday, to allow Christians to worship in their churches, the Monday date for the sit-at-home order remains sacrosanct.

The group warned the people to stay in their homes to avoid being killed by stray bullets from security agents who have been deployed by the government in the states. From Enugu to Abakaliki, Umuahia to Awka, Owerri to Onitsha and Aba, the fear of the unknown has become thick as the hours for the execution of the IPoB order draws closer. Reports indicated that in virtually all the cities and towns in the zone, citizens had, as early as Thursday, last week, began to purchase necessities, mostly food stuffs, in anticipation of the no-movement order.

Meanwhile, Governor Umahi of Ebonyi State has rescinded his decision to seize shops from owners who refuse to open them in deference to the IPoB order.

Umahi, following the outcry that greeted his forfeiture threat, asked traders in the state to obey the sit-at-home order. Francis Nwanze, in a statement issued on Sunday evening, said the governor acceded to the pleas by the residents, who said they would like to use the IPOB sit-at-home day to offer prayers for the repose of the souls of their loved ones who died during the 30-month civil war.

“Following the foregoing, the governor, Engr David Nweze Umahi, who is highly in touch with the people, has directed that those who may wish to remain at home with their shop(s) locked should neither be penalised, nor their shop(s) seized as it is their constitutional right while the rights of those who may wish to go about their normal businesses should not be infringed upon as it is equally their constitutional right,” the statement read.

Some of the residents were reported to have commenced vigil ahead of today, while many of them engaged in panic buying, notwithstanding the sudden increase in prices of foodstuffs. Checks by the Nigerian Tribune showed that prices of food items like meat, tomatoes at Eke Awka, New Market, Enugu and the popular Ariaria market, Aba in Abia State, have gone up drastically.