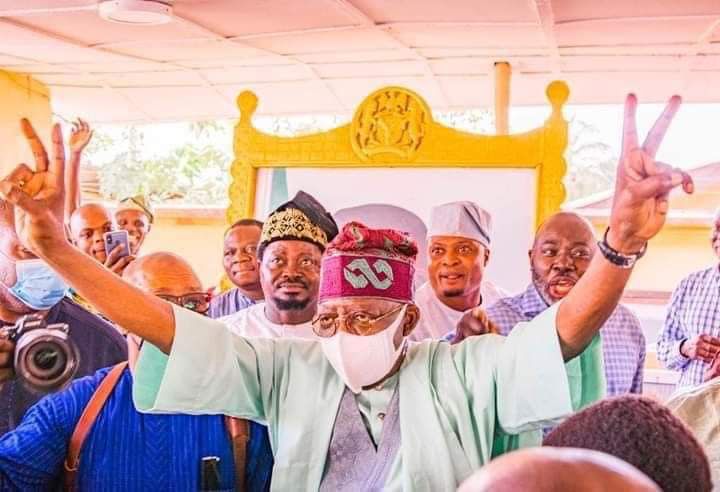 Let us take our minds away from this electoral musical interlude and let us discuss greatness. 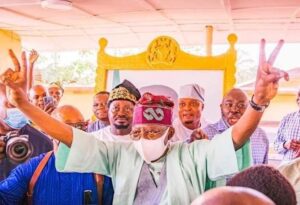 The quality of being great; eminence or distinction.

Let us see what Wikipedia says about the GREAT MEN THEORY.

The great man theory is a 19th-century idea according to which history can be largely explained by the impact of great men, or heroes; highly influential and unique individuals who, due to their natural attributes, such as superior intellect, heroic courage, extraordinary leadership abilities or divine inspiration, have a decisive historical effect.

Write down the keywords…

Now let us take our minds back to this electoral musical interlude, maximum respect to the Abami Eda, the Great Fela Anikulapo Kuti for his evergreen words of wisdom.

Since we are now into the electoral mood let us bring those keywords and rate the greatness of Asiwaju Bola Ahmed Tinubu, the Jagaban of Borgu.

I laugh when people say Tinubu is not influential, he would be displaced in the APC and so many other long grammar.

How influential can one be when everyone including the President addresses him as the National Leader of APC? Do you know that the APC is the biggest political party in Africa?

Are you aware that the position that even the Commander in Chief of the Armed Forces of Nigeria, His Excellency President Buhari calls him is not in the constitution of the APC?

Are you aware that no one before Tinubu has been given such accolades and probably none may come after him and be revered as such?

Even dem Awolowo and the big names wey we dey hear like Nelson Mandela, Thabo Mbeki, Kwame Nkrumah, Abiola and co, nobody go even reach the PRESS call dem with such appendage.

And yet you open your mouth say Tinubu no dey HIGHLY INFLUENTIAL. Second base jare…

Being the only one of its kind; unlike anything else.

How many people be like Tinubu? Under unique let me talk about Tinubu’s human capacity development on individuals today.

Take Tinubu’s one time ADC, Lawal Gbolahan as a case study. After Tinubu’s tenure, he was forced into retirement and was thereafter appointed by Fashola as SA.

Ambode appointed him as a commissioner, Sanwo-Olu retained him and today he has been crowned the Onírù of Irùland.

Please how do you describe a unique individual? How do you depict someone that is great?

Superior Intellect is defined as having the most intelligence out of everyone around you at that moment in time.

When the class of 1999 Governors were shouting they needed more allocation, more funding etc Tinubu said he needed more Local Governments to bring governance closer to the people.

Meanwhile, his colleagues chickened out and he was singled out for attack and Lagos State allocations were withheld for years.

Out of all his colleagues, it was clear he was the most creative and gifted, how do you illustrate greatness again, BIKO? Superior Intellect at its best.

Have you heard Wole Soyinka’s testimony on how Tinubu funded the democratic forces that booted the military out of power?

Have you read about how Tinubu’s house was bombed, he was chased into exile and how he eventually sold his properties to participate in one of the fiercest democratic wars ever?

“Freedom is now or never, We either win it or lose it, Forever”… continue to rest in peace the great Sunny Okosun of blessed memory.

I have earlier mentioned how he fought the PDP led FG over local government creation.

His heroic feats are endless if no b see finish he no go heavy person talk comot from mouth say Tinubu no get courage?

This is where we go end lesson one. To date, Lagos remains the pacesetter of economic development in Nigeria and to a large extent Africa.

Today countries across the globe are sending emissaries to Lagos to learn its tax reform system, traffic control management, waste management and indeed other initiatives as started by Tinubu in 1999.

So let the challenge of greatness begin since a prophet won’t be honoured in his own town just because of bad belle.

Where are the class of 1999 Governors? Where is Joshua Dariye? James Ibori, Atahiru Bafarawa, Lucky Igbinedion, Ahmed Sani etc  I know you have probably forgotten the majority of them.

Please let us pinpoint their legacy projects and what value it is today, from Tinapa to whatever one you can think of across the states for the class of 1999? What do they have to show now?

How do we characterise greatness? Okay, let us forget about the main characters themselves what of their aides?

Dem no get ADC, get cooks and drivers? Abi na only dem follow go Government house?

What of their commissioners, special advisers nko? Who are they today and what have they contributed to their immediate society?

“Be not afraid of greatness. Some are born great, some achieve greatness, and others have greatness thrust upon them.” ― William Shakespeare.

Tinubu is the epitome of Greatness he would definitely leave his Footprints on the Sands of Time.

Let me sign out with this quote from Ralph Waldo Emerson,

All For One, And One For All: As Group Of Aspirants Endorse Saliu Mustapha As APC National Chairman(Photos)