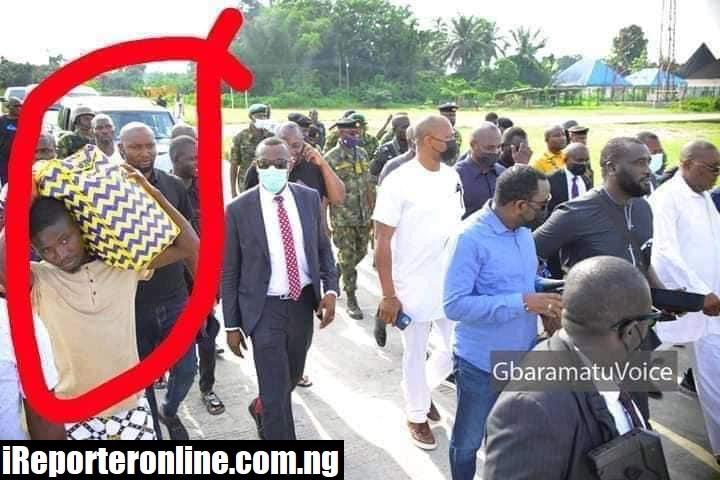 Fresh facts have emerged that the sacking of the chief press secretary to the minister of niger Delta affairs may not be unconnected with the mismanagement of their recent visit by the minister to Chief Government Ekpemupolo alias Tompolo.

Anietie Ekong, is said to have attracted the irk of his principal, Senator Godswill Akpabio, when pictures of a large ‘Ghana Must Go’ bag, suspected to contain millions of hard currency, were seen on the social media being escorted by the Minister to the creek.

It is believed that Akpabio’s philosophy, “what money cannot do, more money can do”, has led to the alleged frittering of billions of public funds on frivolous expenditures.

The visit to Tompolo followed a seven-day ultimatum, where the ex-militant threatened to disrupt operations by the NDDC and other federal government parastatals if a substantial board is not put in place by the Minister.

However during the visit, reports confirm that Akpabio and his entourage were seen coming out of the creeks, but without the big bag they dragged with them.

Whatever the contents of the bag, it was enough for the ex-warlord to grant an extension to the ultimatum he issued, with the Minister given till the end of June to constitute the substantive board for the regional money-spinning intervention agency.

However, Mr Government Ekpemupolo disagreed with the notion that Akpabio’s money moved him to shift grounds.

In a statement, he said he review the early ultimatum he issued last Monday due to the aftermath of the consultative meeting held at Oporoza in Gbaramatu Kingdom in Warri South-West Local government Area (LGA), Delta State by leaders, youths and stakeholders from the region and not any form of inducement.

Ekpemupolo said he waded into the matter because of his love for the region and Nigeria, noting that he could not be compromised by money and other material things.

But Senator Godswill Akpabio is said to have been greatly embarrassed when the pictures of one of his aides carrying the huge bag, attracted widespread condemnations and ridicules from the media.

He blamed Anietie Ekong for negligence and carelessness in the pictures he sent out to the public.

His anger was further heightened when it was discovered that no external cameraman had access to the minister’s visit which was done by boats and highly restricted.

A letter yesterday, by the Chief of Staff to the Minister, Sir Etekamba Umoren, announced that Anietie Ekong has been replaced by Jackson Udom, publisher of an online media platform, Pees Reporters.

Jackson Udom, a one time reporter with Tribune Newspaper had worked under Anietie Ekong in the media team of the Minister.