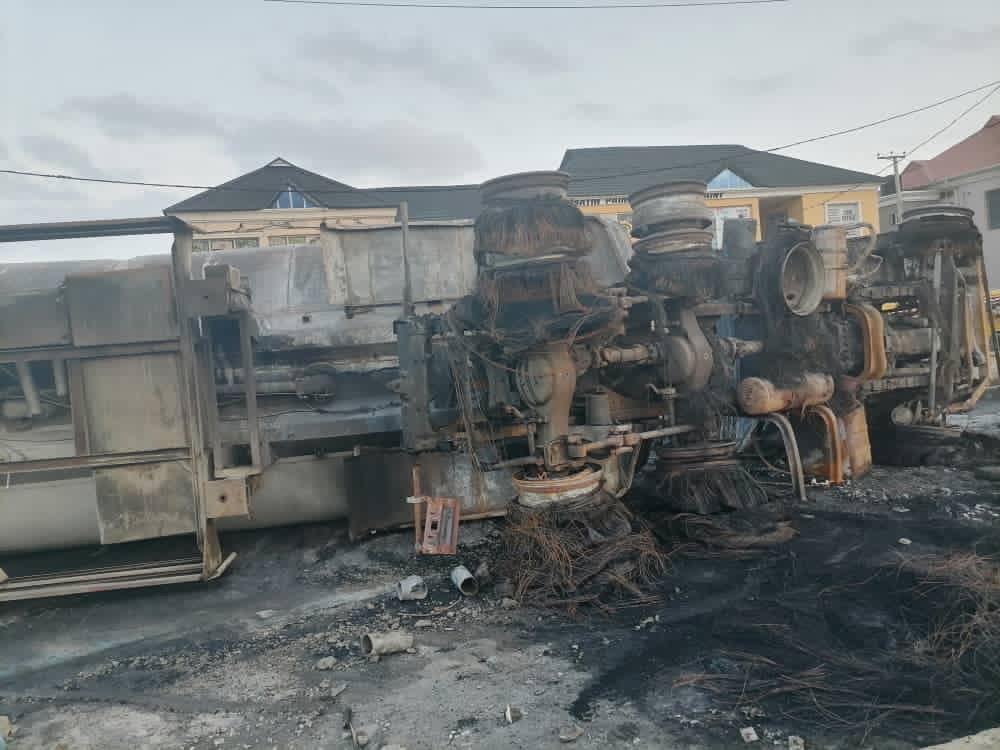 A resident of Egbeda in Lagos experienced usual traffic on Tuesday morning following a tanker explosion which occurred around midnight.

The ever-busy Idimu road where the accident occurred has been cordoned off, forcing motorists to ply internal routes.  This has compounded the traffic logjam in the area as students and workers were stranded while passengers spent longer hours on the road.

The scene of the accident is usually crowded as traders at nearby Egbeda market sometimes display their wares around the place. Hawkers are also at the spot of the accident.

But the place was deserted at the time of the incident.

In a statement, the National Emergency Management Agency (NEMA) said the ill-fated tankers was fully loaded with about 45,000 litres of petrol.

“A tanker fully loaded with about 45,000 litres of PMS exploded immediately after crashing at Banire/Ejigbadero Busstop, Egbeda, Lagos. The incident which occurred at about 20 minutes past midnight (0020) involved a tanker which reportedly loaded at Abuke Ado, in Lagos.”

“The tanker with no registration number is still half-filled with PMS and stranded across the major highway. No life was lost or property destroyed.

“The Police Disaster Management Unit and Gowon Estate Police Station have apprehended the driver of the truck. The National Emergency Management Agency (NEMA) also reacted immediately to the distress alert and quickly responded

“Presently, efforts are on to decan and transload the volatile content to another tanker before the road can be reopened for traffic. Also at the scene of the incident are the Lagos State Emergency Management Agency (LASEMA) Response Unit, Police DMU and the Gowon Estate Police Division.”