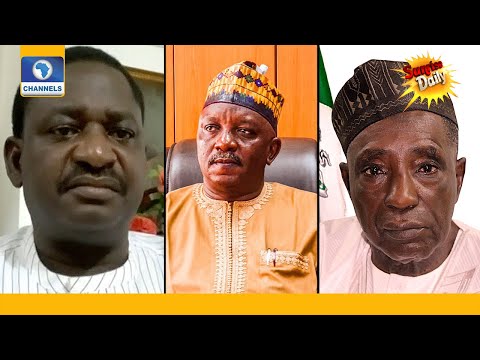 The Presidency has clarified that President Muhammadu Buhari did not sack two members of his cabinet because of their weak performance.

President Buhari’s media adviser, Femi Adesina, made the clarification when he featured as a guest on Channels Television’s Sunrise Daily on Thursday.

“Rather, he said he had called them personally to thank them for their services to the country and so, they needed to move on to other things and he replaced them; in no place did he say that their performance was weak.”

More than two years into his second term in the highest office in the land, President Buhari relieved the Minister of Agriculture and Rural Development, Mohammed Nanono, as well as the Minister of Power, Saleh Mamman, of their duties on Wednesday.

Although no definite reason was given for the President’s action, speculations emerged that the sacking of the ministers could not be far from their performance.

While Adesina acknowledged that the President must have had reasons for dropping the two ministers, he insisted that there was no place it was said that their performance was weak.

He described the claim of weak performance as speculation from those who have been analysing matters, stressing the fact that the President said he had reviewed the performance of the cabinet and he needed to reinvigorate for the last run.

“The government is just but 20 months left and the President said he wanted to consolidate on legacy performance and legacy project,” the presidential spokesman said.

“There are areas of improvement in those two sectors – agriculture and power; we can always improve in whatever we do, but the President must have what he wants to achieve in those two areas within the 20 months left in government, and maybe that was why he did what he did.

“It was by no means a red card on their performance; no, he didn’t say that in that speech.”