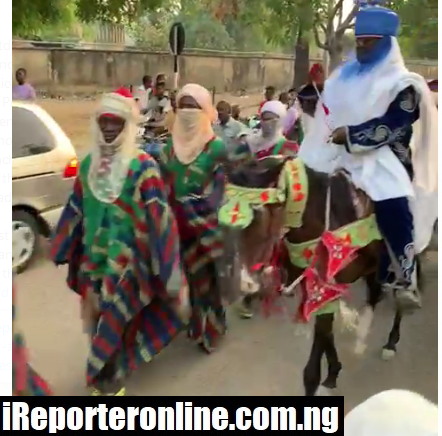 Here is all the highlight for the week, I know you have been looking forward to hearing from us, this is your usual host, Osigwe Omo-Ikirodah and today’s highlight would be done in freestyle.

As you are all aware team Tinubu came out unscathed last weekend after a brutal attack by oppositional forces at an away encounter. The media battle was tough,  the intention by the Home Team was to demoralise the defence of team Tinubu in other to allow for easy penetration into the 18-yard box.

The strikes were from all flanks and seem well-coordinated, more than four simultaneous attacks were launched against team Tinubu all with the intent of slowing down the rising pace of team Tinubu’s forerunners.

Tinubu’s name was all over the media for groundless allegations, the pressure was really much and the defence of some notable players like former Ekiti State Governor, Niyi Adebayo Jnr and some others did well by neutralizing their attacks, their reassurance to teammates that the Jagaban was still in control surely did a lot in putting up a strong defence by the visiting team.

After the failed attempt for the home team to secure the ball at the back of the net, the team had no choice but to allow the visiting Team Tinubu to leave without securing any point from the encounter.

In a runoff of events, Team Tinubu has scored a huge away victory in far away Bauchi State, this is more than a brace and aside from giving the team a four-point advantage, it would surely boost the morales of local fans in the North-East. The campaign for team Tinubu’s endorsement in the North-East was launched with fanfare in Bauchi State.

Local fans came out en-mass for a roadshow to confirm acceptance of Tinubu’s 2023 presidency in Bauchi State. Against the heavily sponsored media attacks, the team seem to have recovered and scored a major away victory with this outing.

Meanwhile, all other aspirants are still lurking in the shadows with no visible players showing interest in signing up for their team, while team Tinubu can boast of four main teams with at least 3 junior teams the rival teams are still struggling to get a full first team.

We would leave you with a video of the roadshow in Bauchi as we look forward to exciting football matches next week. Till then it is CIAO from me.

For betting odds make a date with us on Monday when we shall reveal all the soccer odds and which team and players to focus on.

Edo: NBA Calls For The Review Of Curfew In Place Says Unscrupulous Security Agents Use It As A Tool For Extortion

2023: See The Condition Wike Gave Jonathan For Him To Support  His Presidential Ambition