Nigerian singer, Kizz Daniel has finally reacted to the reports that he impregnated a lady identified as Poshmerald, a fashion stylist who is said to be due at some point in October.

In his reaction, Kizz Daniel took to Twitter to say; “how many people I don give belle like this? Una no dey Taya (Don’t you get tired)?”

Kizz Daniel has been rumoured to impregnate a few ladies in the past including singer Chidinma Ekile, which all turned out to be false. 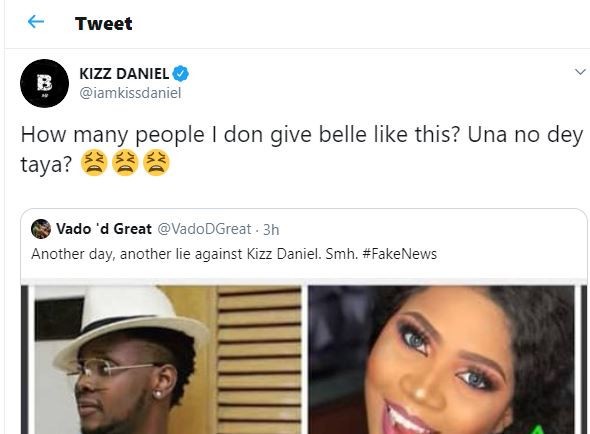 Meanwhile, Kiss Daniel is allegedly expecting his first child with his girlfriend who happened to be Davido’s ex-girlfriend.

The singer’s girlfriend identified as Adedamola Williams who is an Instagram model and a graduate of Afe Babalola University is allegedly pregnant for him.

0 comments on “Kizz Daniel Speaks On Expecting A Baby With Fashion Stylist, Poshmerald”