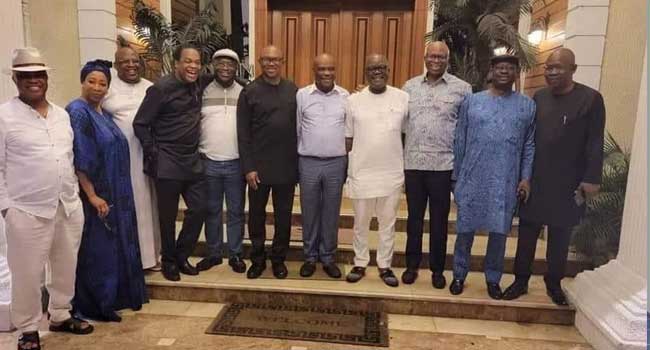 Ahead of the 2023 general elections, Rivers State Governor, Nyesom Wike, has again met with the presidential candidate of the Labour Party, Peter Obi.

Also at the meeting which was held at Wike’s private residence in Port Harcourt is the former governor of Ondo State, Olusegun Mimiko.

Although the purpose of the meeting could not be ascertained, it may however not be unconnected with the 2023 general elections.

Taking to Twitter on Monday, Mimiko shared a photo with the politicians, saying that it was nice to spend some time with them.

Monday’s meeting with Obi comes about after Wike met with the LP presidential candidate. Just like the previous meeting, the motive for the latest meeting was not made public by either of the politicians.

Similarly, Mimiko last met with Wike in his private residence in Port Harcourt on Thursday, August 11.

The Rivers Governor has been meeting with top politicians recently, especially those from other political divides.

He has been hosting top political figures, fuelling speculations that he may dump the Peoples Democratic Party (PDP) after failing to clinch the party’s presidential ticket.

Although Wike has repeatedly pledged his loyalty to the main opposition party, his body language suggests he may not be working for Atiku Abubakar, the PDP presidential candidate for the 2023 general elections.

2023: Moghalu Sends Important Message To Electorates Who Insult Others Who Don’t Support Their Candidate