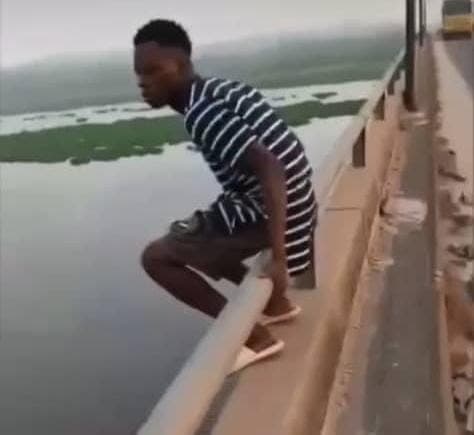 Facts have emerged on Wednesday how a 21-year-old man, Odunare Olalekan, sighted in a viral video on Tuesday committed suicide at Epe in Epe Local Government Area of Lagos State.

Olalekan in the viral video was sitting on the bridge handrail and suddenly jumped into the river around Berger Bridge in Epe.

In the 30-second video, the person who recorded the scene was overheard asking Olalekan what was wrong with him.

Sources however told Daily Trust that Olalekan, who left a one-year-old baby, told his father, Mr Odunare, in the early hours of Tuesday to pray for him.

“He also told his girlfriend who is 19 years old to take care of his baby.

“Thereafter, he left to the bridge side to commit suicide by jumping inside the creek, without giving any reason for such action to his family,” the source, a family member who spoke with Daily Trust, said.

Olalekan was said to be a holder of an Ordinary National Diploma (OND) certificate and a worker at Alaro City, a mega estate along the Lekki-Epe Expressway.

The family friend further narrated: “For some time now, Olalekan has been acting strangely.

“For more than a week, he couldn’t sleep. He just woke up yesterday (Tuesday) to say he was going. They asked him, ‘going where?

“They tried to hold him but he overpowered the people around because he was very strong.

“Maybe it was a spiritual attack. But we could not ascertain that. He just woke up and said he was going and that they should pray for him.

“They held him but he overpowered them and went straight to his girlfriend’s house to tell her to take care of his child because they might not see each other again.”

It was learnt that one of his brothers who lives in Ajah saw the trending video and alerted the family.

“He told their father that they should not bother looking for Lekan because he saw him on Berger Bridge as he jumped into the lagoon and he must have died,” the source further said.

Another source told our correspondent that Lekan died a few months after the death of his elder sister who was a student of Lagos State University (LASU). She reportedly slumped while writing exams and died.

Asked why the person recording him could not save him at the scene, the family friend said, “The person that made the video was alerted by some motorists on Lekki-Epe expressway and he was walking towards him while recording but he could not catch up with him.

“The guy was far away from him. He was about to hold him when he jumped inside the river. Nobody could hold him there except somebody who can swim.”

As of the time of filing this report, his body was yet to be found almost 48 hours after with our source saying rescue efforts were being hampered by the massive presence of hyacinths in the river.

Spokesman of the Lagos State Police Command, CSP Adekunle Ajisebutu, was yet to respond to our correspondent’s enquiry as of the time of filing this report.

Student Captured Doing The Unthinkable With A Cow (Photo)