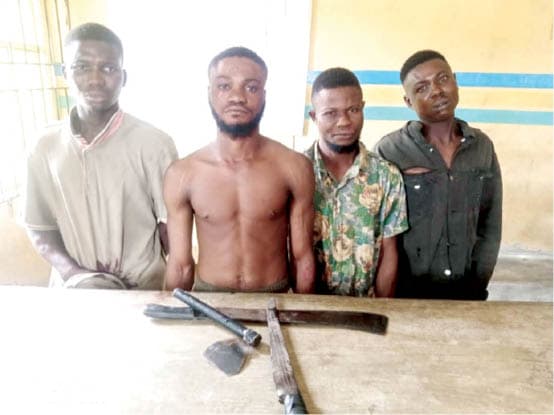 The police command in Ogun State yesterday said it has arrested additional four suspected cultists following the raging cult war in the state.

This brings to 11, the number of suspects nabbed over the renewed cult clash that have claimed three lives.

The police spokesman in the state, Abimbola Oyeyemi, said the arrest was in continuation of the clampdown on cultists and other criminals across the state.

He said the four suspects, who were members of the dreaded Eiye cult group, were arrested when they were holding “nocturnal meeting in preparation for an attack to be launched on members of another cult group.”

He said the suspects, Oriyomi Bankole a.k.a Ortom, Odedina Sodiq, Shofola Ayodeji and Adelawa Ayo in Oke-lantoro and Technical college Leme, following credible information that the suspects were meeting in those locations, planning to launch attack after their meeting.

He said “Upon the information, the commissioner of police, CP Lanre Bankole, ordered the CSP Shobiyi Oluwatoshin- led anti cultists section to storm the place and dislodge the hoodlums.

“In compliance with the CP’S order, the team moved to the scene at about 8:30pm where four of them were arrested while others escaped.

“Recovered from them are cutlass, battle axes and criminal charms,” he said.