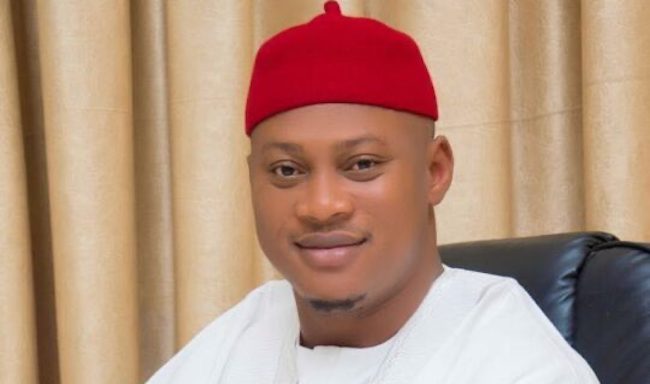 A DUPLEX located at Diamond City Estate, Enugu and belonging to the former commissioner for lands and Urban Development in the state Dr. Victor Nnam, was on November 9, marked for demolition by the Enugu Capital Territory Development Authority, ECTDA.

However, there are indications that the latest move by ECTDA to demolish the house belonging to the former commissioner might be connected to his decision to make his resignation public and the circumstances surrounding it.

Although the former commissioner has been severally accused of corruption and complicity in land racketeering during his time in the ministry, the question of why his house was not marked for demolition while he was still an officer readily comes to mind.

Recall that the commissioner resigned his appointment with the state government in October after his proposal to reform land administration in the state was, according to him, “turned down without any reason”.

In the resignation letter titled, ‘Letter of the resignation of my appointment as the Commissioner for Land and Urban Development, Enugu State,’ and dated October 29, Nnam said he was unhappy about the removal of the professional heads of departments in his ministry, which he alleged was on a punitive ground.

In the letter, Nnam alleged that the state governor, Ifeanyi Ugwuanyi, refused to approve his proposal for a Geometric Information System (GIS) land administration to stamp out land grabbers and create investors’ confidence in Enugu State.

“The reason for my resignation is the recent removal of the professional heads of the department under me on punitive grounds for simply doing their jobs diligently, “he said. “My conscience will no longer allow me to continue to serve your administration while those innocent professional senior civil servants are punished for doing the right thing.”

Before Nnam resigned from his position as land commissioner, complaints of land grabbing by the government was commonplace, so much so that it was perceived in several quarters to be a silent official state policy of the government.

Much of the complaints were hinged on the fact that the current administration deployed land grabbing as a weapon to suppress the citizens economically.

In mid-2020, for instance, several communities protested the culture of land grabbing in the state. The people of Ibagwa Nike, in Enugu-East local government, are still in deep agony over the forceful takeover of “ancestral land of the Umuaneke Ode family with over 150 buildings already erected without compensation.

In 2018, indigenes of Ogbagu Agbani community in Nsukka local government held a peaceful protest where they told the state government to pay compensation for food crops and economic trees worth over N50 million, which were allegedly destroyed at the site of a proposed housing estate.

Across Nsukka, Orba in Udenu Local government, Ndiagu Attakwu in Akegbe Ugwu, Nkanu West local government and Ibagwa Nike in Enugu East, the story was (is) the same.

The menace left many homeless, and the future of their children threatened, with nowhere to stay.

While his resignation letter- which trended on social media platforms- earned him praises from Nigerians- Nnam came under intense criticism from different groups and individuals who accused him of being arrogant, unfriendly, and corrupt, among other things.

Some of these institutions and individuals who have taken a swipe at the former commissioner include Enugu State University Teaching Hospital, ESUT-TH; Nigeria Labour Congress, (NLC); Trade Union Council (TUC); Nigeria Union of Local Government Employees (NULGE) and a former local government chairman in the state and others.

In their reaction to his resignation, a Coalition of Enugu State landowners in Enugu State said it was long overdue, insisting that the former commissioner must be investigated for all the allegations of land grabbing against him.

Authorities of the Enugu State chapter of NULGE asked Nnam to bury his head in shame and seek God’s forgiveness in all the land scams he allegedly committed that culminated in his forced resignation.

The President of NULGE, Kenneth Ugwueze, said the Union was still in doubt that Nnam, who allegedly tormented the association using land grabbing agents and refused to listen to its cries would come up with a resignation letter using the words ‘diligently’ and ‘Conscience.’

“If the said letter arose from him, then he needs to search further the true meaning of diligence and also may be referring to a guilty conscience,” he said.

Ugwueze recalled that NULGE was allotted a piece of land at Independence Layout, Enugu, alongside other professional bodies like Nigeria Society of Engineering, Enugu State Branch and a few individuals by the past administration of Barrister Sullivan Iheanacho Chime in the year 2012 for the erection of her permanent State secretariat, which also serves as the zonal office for the Southeast.

He noted that NULGE possessed the land ownership with considerable works going on for years until July 2021 when the Commissioner for Lands appeared claiming ownership of all the lands belonging to NULGE and the Nigeria Society of Engineers, among others, (with erected buildings) without prior notice, whatsoever.

“We wrote to the Governor of Enugu State Dr. Ifeanyi Ugwuanyi, crying out for help as he was also aware of our ownership of the land,” he said. “While the security agencies were still investigating and making their preliminary reports, the commissioner hurriedly tendered his resignation letter to avert his sack since his guilty conscience was already staring him in the face claiming to be in the hospital for some time”.

He explained that if grabbing people’s land without due process is diligent work done by the affected officers and his version of ‘World Best Practices in Land Administration’, then the former commissioner should blame himself for the act, and seek forgiveness from God and so many groups and individuals that he had treated unjustly in the name of ‘diligence’.

The Labour Union insisted that investigation by security agencies where it filed petitions against Nnam’s alleged takeover of the Union’s developed plot in Independence Layout Enugu should be conclusively done and appropriate measures taken.

When this reporter reached out to the ECTDA to respond to the allegations, its Public Relations Officer, Gideon Eze, said he did not have any information concerning the matter. Efforts to get the former Commissioner to react also proved unsuccessful as he neither picked his calls nor responded to a text message sent to him.

JUST IN: Panic As Nigeria Confirms First Case Of Omicron