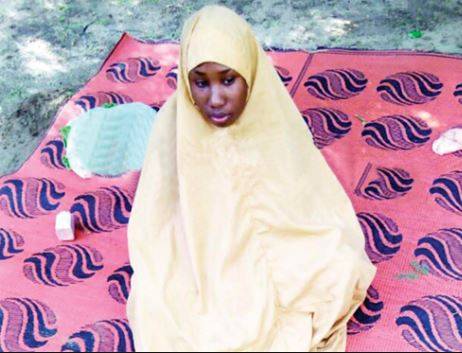 Exactly four years (1377 days) after being held captive in Boko Haram captivity, parents of Leah Sharibu on Saturday continued their demand on the Federal Government to fulfill its promise and secure her freedom from the insurgents.

While demanding the safe release of their daughter, Nathan and Rebecca Sharibu said they do not want to believe that the recent promises by the regime of the President, Major General Muhammadu Buhari (retd.), “are as empty as those that have been made before.”

Leah Sharibu was one of the 110 female students of the Government Girls’ Science and Technical College, Dapchi, Yobe State, who were abducted on February 19, 2018, by Boko Haram terrorists.

While others were released by the terrorists following negotiations, Leah, then 14 years, is still being held captive because she refused to renounce her Christian faith.

The traumatised parents made their submissions in a statement titled: “An Appeal”, signed by their Spokesperson and President of Leah Foundation, Dr. Gloria Puldu.

She said, “Nathan and Rebecca Sharibu hereby call upon the leaders of Nigeria to expedite the safe release of our daughter, Leah Sharibu, who has been held hostage against her will in the past four years.

“Specifically, we address our most urgent appeals to General Farouk Yahaya, Chief of Army Staff, who only recently went on public record assuring the nation that Leah would soon be rescued. Nearly one month has now passed since General Yahaya’s statement, and nothing has changed.

“As a family, we do not want to be quick to make public statements or accusations, especially when such prominent military leaders have so assuredly promised us that Leah would be returned to us, and that they truly were concerned for her welfare.

“When we hear such promises, hopes are raised beyond any ability to describe or put into words, and we can only imagine that our long nightmare is coming to an end and that soon we will be rejoicing as we embrace our beloved daughter and weep tears of joy.

“We also imagine how grateful we will be to the Buhari administration on that day, and to the tens and hundreds of thousands of Nigerians and people from around the world who have upheld us, advocated for Leah, and spent many hours in prayer, writing letters, or speaking out on her behalf.

“We do not want to believe that the recent promises are as empty as those that have been made before. When we see or hear reports of other hostages being released or rescued, we do feel joy for them and their families. But it is also hard for us to be selfless, and not ask ‘Why not Leah?’

“1377 days have passed since that terrible afternoon of February 19, 2018 when Leah was taken hostage from the Government Girl’s Science and Technical College located in Dapchi; days of holding our breath, clinging to hope, and sleepless dreams.

“How can our leaders go about their days or sleep easily at night, knowing that the safety and security of our people is lessening every day, not just in Northern Nigeria but even in the most Southern parts of our country? What is the legacy that General Buhari and his cabinet and ministers are writing for future generations to study and read? Will our leaders be remembered, not for what they have done, but what they have failed to do?”

2023: Tinubu Knows Nigeria’s Problems Like The Back Of His Hands – Sanwo-Olu